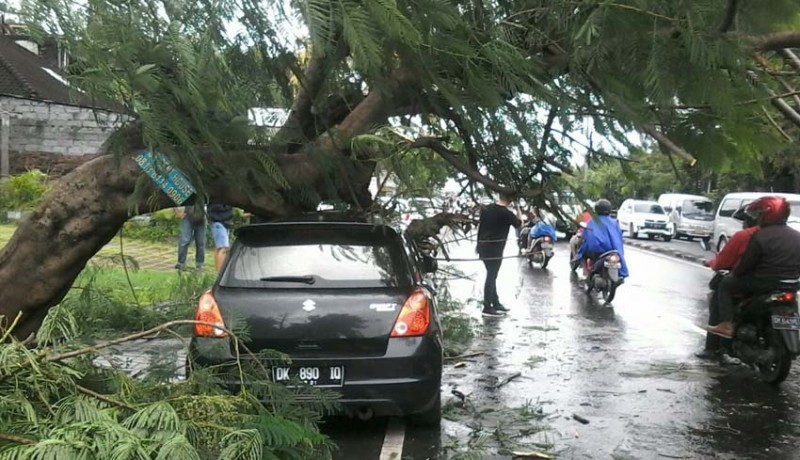 Heavy rain and strong winds on Tuesday afternoon uprooted several trees in Nusa Dua, Jimbaran, and Denpasar, crushing a car in Jimbaran and motorcycles around Denpasar.

“Around 14.30pm, we received a report that a tree had fallen and crushed a Suzuki Swift parked on the side of the Bypass Ngurah Rai, Jimbaran, road (near Pizza Hut Unud),” said I Nyoman Sudita, Head of the Regional Emergency Disaster Rescue (BPBD). “Our team immediately went to the location and for about 30 minutes we were able to evacuate the car from under the tree.” Sudita also revealed that a street light had also fallen in Jalan Raya Taman Griya, Jimbaran.

Not only in Jimbaran, but a similar incident happened in Siligita, Nusa Dua, when a fallen tree blocked an entire road. The BPBD team also managed to handle the situation. In both cases there were no injuries reported, though unfortunately the same cannot be said in Denpasar where three motorcycle drivers were injured due to falling trees.

There were five trees uprooted around Denpasar, and on three occasions people were slightly injured.

The Metereology, Climatology, and Geophysics Agency (BBMKG) in Denpasar released information that the wind that happened yesterday was categorized as gust. The intensity of the wind at Ngurah Rai Airport was around 30 knots or 54 kilometers per hour, however it past quite swiftly.

“It happened around 14.00 – 14.30 PM, and it was quite sudden yet short lived, and afterwards the intensity dropped to 8 – 40 km per hour,” says Eka Arisanti, the spokeswoman from BBMKG.

The agency would like to remind people to be cautious of the weather. She said that the phenomenon is normally triggered by the formation of the Cumulonimbus clouds. After they are formed, the winds will gradually decrease.

Meanwhile Nyoman Gede Wiryajaya, the Head of BBMKG in Denpasar, says that what is happening is normal considering that we are currently in the rainy season. “Though if it does become stronger then there’s a potential for a typhoon to happen,” he says. “If it grows more significant then we will notify the public immediately.”

[Lots of rain this morning but winds have decreased. Ed]