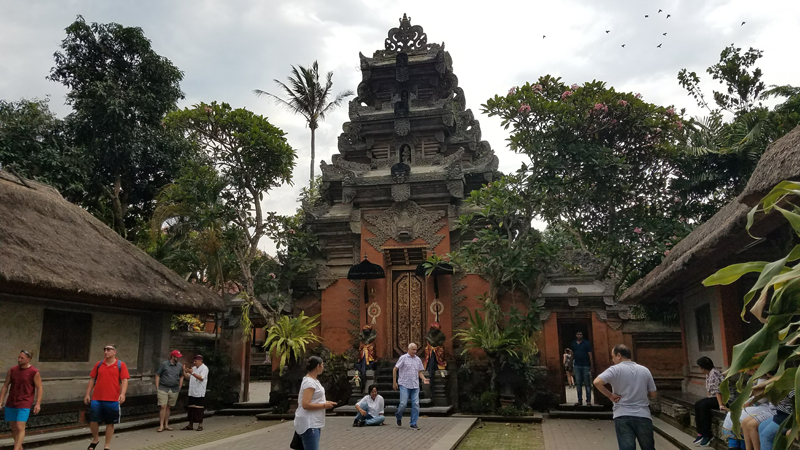 A foreign woman was found wandering around the private area of Puri Agung temple on Thursday and wound up arrested by police while trying to escape.

The Head of Gianyar Municipal Police (Satpol PP), Cokorda Agusnawa, told reporters that the woman did not appear to be mentally disturbed. “We could not consider her a crazy woman. We had a normal conversation with her. However, she didn’t want to reveal her name or where she was from,” he said.

Cokorda explained that the incident began when temple security reported a woman entering the temple’s private area which can only be entered by family of the temple owner.

“She said that her wallet was lost and the security officer reported her to police because he thought there was something wrong with her,” he added.

Then the woman was detained and taken to Gianyar Municipal Police Office. When she was questioned, she still didn’t want to reveal her name. She only said that her name is Love and came from Love country. “We suspected that she was lost, then decided to take her to Social Service,” he said to balipost.com.


On the way there, she tried to run away heading towards Gianyar Market. The officers found her on Jalan Darmagiri, Gianyar. “Fortunately we could find her again. Then we went to Gianyar Polres,” he said.

At Gianyar police office, the woman was questioned again, but she insisted and didn’t want to reveal her name and where she came from. “Then we took her to the Social Service office,” he said.

“Again, she didn’t want to reveal where she stayed and where she came from. We just want to help her. If she was lost, we can take her to the Immigration Office,” said the Head of Social Rehabilitation of Gianyar Social Service, Ida Bagus Rawisnu.

The woman denied that she was crazy and she said that she is happy being in Bali. Then she rested for a while at the Social Rehabilitation office. When she woke up, she was taken to Bali Province Social Service office.