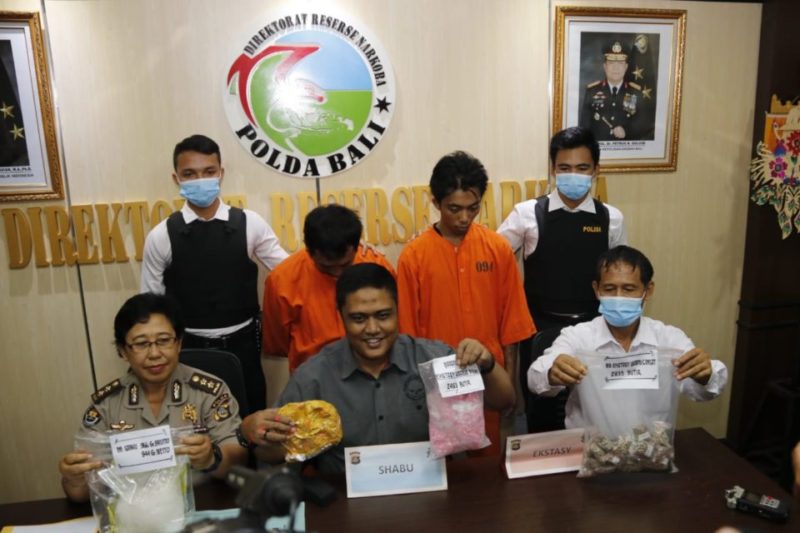 The Bali Polda Drug Unit have arrested two men in connection with a drug bust related to a syndicate named the Sidoarjo-Bali network.

Police arrested a drug dealer, NIW, 38, and his courier NMC, 20, who were found in possession of 5,428 ecstasy pills and 944 grams of meth. The drugs were allegedly imported from Malaysia and China.

Second in charge at the Bali Polda Drug Unit, Superintendent Sudjarwoko, said that the suspects are known to be both members of the Sidoarjo-Bali network and also that the men were arrested on January 25 after a police investigation of four months.


The arrests began with NMC being arrested as a courier at his room in a hotel in Kuta. They didn’t find any evidence, but after interrogation the suspect admitted that he was paid Rp 2 million to bring drugs from Sidoarjo to Bali.

“When we arrested NMC, the packages had already been delivered to the other suspect, NIW, in Gerengceng, Denpasar,” said Sudjarwoko to kumparan.com at Bali Polda Office on Monday.

Police found NIW in his room on Jalan Sutomo, North Denpasar and was arrested. Police discovered 5,428 ecstasy pills and 944 grams of meth in the room. The suspect admitted that he was going to distribute the packages to Denpasar, Badung and Buleleng districts and some would be sent to Kerobokan Prison.

Police suspect both men were controlled by a man called GS in Sidoarjo and the drugs were imported from Malaysia and China. “These two suspects were assigned by their boss, GS, who lives in East Java and has become a member of a larger Malaysian and Chinese network,” Sudjarwoko said.

GS has been on a Bali Polda Wanted List (DPO) for over a year, after they discovered the man had been distributing drugs in Bali for the last three years.

NMC and NIW violated Article 112 and 114 of Criminal Code and are now facing a minimum five years and a maximum of life imprisonment.