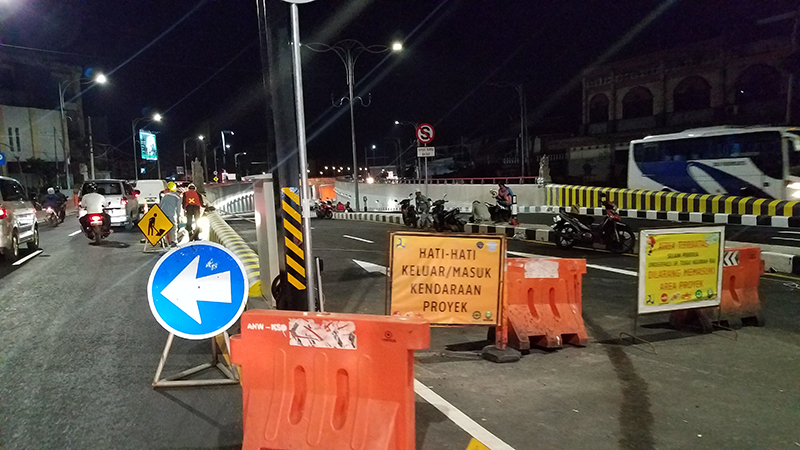 Image: The underpass will remain blocked off after testing. Credit: ST

The construction of the Tugu Ngurah Rai Underpass on the Bypass Road, near the airport has been completed 50 days earlier than the estimated completion date of October 20, 2018. The Rp. 168.38 billion underpass has been completed since August 31, 2018 and the plan now is to test the underpass today, September 10, 2018, then open for good some time soon.

This was all according to Commitment Making Officer (PPK) Region VIII National Road Implementing Agency (BBPJN), I Nyoman Yasmara, who also said the project would be finished in August back in May.

He wasn’t too far off the mark as today, Monday (10/9) there will be a trial of the underpass and on Wednesday (12/9) a Hindu cleansing ceremony will be held. “Yes, we will celebrate the Pamelaspas of the underpass which has just been completed,” Yasmara said, confirmed by NusaBali on Sunday (9/9).


Yasmara said that the Tugu Ngurah Rai Underpass project has been built quickly so that it can be used during the upcoming Annual Meeting of the IMF-World Bank in Bali, which will be held in October 2018. The new underpass is expected to overcome traffic jams that have often occurred around the Tugu Ngurah Rai Intersection roundabout.

However, Yasmara claimed that he did not know when the underpass will be officially operating. So far, they are still waiting a central government decision.

“We will inform you later. We are currently coordinating with the center. I don’t know when it will be inaugurated and the underpass testing hasn’t been completed yet either. However, the project was handed over on September 5,” Yasmara said.

Meanwhile, according to the Head of Denpasar Police, Commissioner Rahmawati Ismail, the underpass was planned to be tested today, Monday, (12/9). The underpass testing is for roadworthiness,” she said.

After being tested today, it will be closed again. Commissioner Rahmawati could not ascertain until what time the trial would be conducted today, as testing would continue as long it took to find out what they need.

“What is clear, though, is that after the trial the underpass will be closed again. Two days after the trial, the pamelaspas or cleansing ceremony will be held on Wednesday. And for the inauguration, so far there is no further information,” said Commissioner Rahmawati.