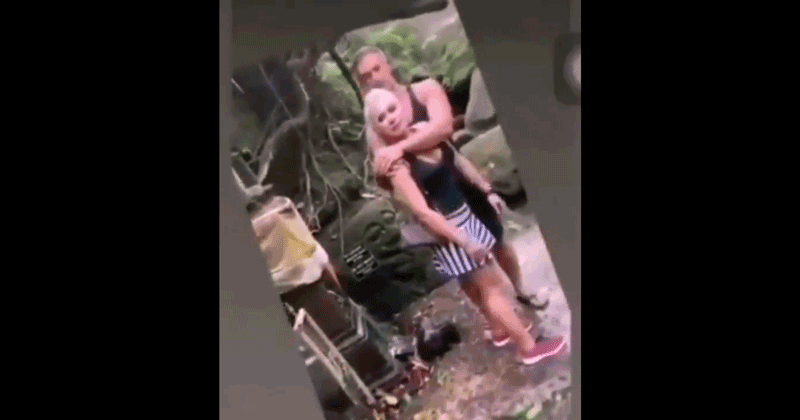 A video of a Czech couple allegedly acting disrespectfully at a temple in the Monkey Forest area of Ubud went viral on social media yesterday. The two foreigners eventually apologized.

The video in question was uploaded to an Instagram account story of one @sabina_dolezalova_ifbb. In the video Sabina Dolezalova is seen joking with her partner Zdenek Slouka and using the holy tirta water pouring from the pelinggih to clean her backside.

Bantu share seluasnya. Show the world how tourism has made Bali into an island of the ignorants. pic.twitter.com/pW7N86qOvc

After a lot of comments, through the Instagram story, the tourists expressed their apologies. Both claimed to not know about the existence and importance of the holy tirta.

“We sincerely apologize for the video yesterday. We did not respect the sacred temple and tirta in Ubud, we apologize to you all,” said Zdenek Slouka.

“We didn’t know about the holy water or holy temples and we had no bad intentions. We are very sorry and hope that you will forgive us. We are now finding out what we can do to improve the situation. Have a good day and we sincerely apologize,” continued Sabina.

These apologies were uploaded by both on their Instagram story accounts.

Contacted separately, a senator of the DPD Bali government, I Gusti Ngurah Arya Wedakarna Mahendradatta Wedasteraputra Suyasa deplored the incident. Arya protested loudly from the start upon learning of the abuse of the temple.


“Yes, I am very concerned because these tourist abuses are becoming more regular. The immigration controls aren’t strict enough or it’s foreigner ignorance. But I think if they want to go anywhere else like in Thailand, it is very strict and no rules can be abused. Personally, I think that these people only want to go viral on social media,” said Arya Wedakarna when contacted by Detik.com via telephone on Sunday (11/08/2019).

Wedakarna reiterated that the water pouring from the pelinggih was holy water used for ceremonial purposes. By using it to ‘wipe their backsides’ these people are considered to be abusing all Hindus.

“Even the visualization of the water coming out of the pelinggih, is already an abuse, because the water is used for sacred things,” he said.

The senator also highlighted the incident because of the rampant existence of illegal foreign guides. He also hoped that there would be an evaluation related to controlling foreigners who were on holiday, but became illegal guides in Bali.

“The lack of strict supervision of these illegal guides needs to be tightened. This abuse of the tirta temple would not occur if they are accompanied by a local guide,” he said.

Wedakarna also plans to take action against the tourists so that they conduct an apology ceremony.