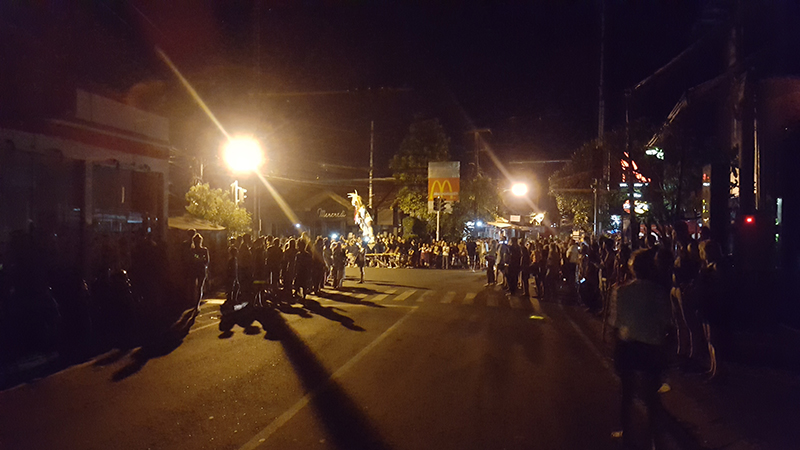 Image: Waiting the next Ogoh-Ogoh at the Kerobokan traffic lights.

Nyepi celebrations begin tomorrow (Pangerupukan) with family and village ceremonies at 6pm (Mecaru) and then everyone is out on the streets to witness and have some raucous fun at the Ogoh-Ogoh parades (Pawai ogoh ogoh). They are all around town along the main streets, culminating on main intersections where the Ogoh Ogoh are judged for the best of the year. Check the billboards put up on the intersections for details. People file home around midnight and at 6am, Saturday Nyepi begins.

Meanwhile, the police and pecalang will be out in force making sure that the evening proceeds securely. Denpasar Police have already mapped out the possible danger spots where they will be giving extra attention.

The Section Head of Denpasar Police, Commissioner Nyoman Gatra, said at a coordination meeting on Tuesday that Jalan Teuku Umar is one of the spots, since there has been clashes between different organisations (ormas) before and Tanjung Benoa because of the reclamation protests. The East Denpasar and the Serangan areas were also included on the hot spot list. 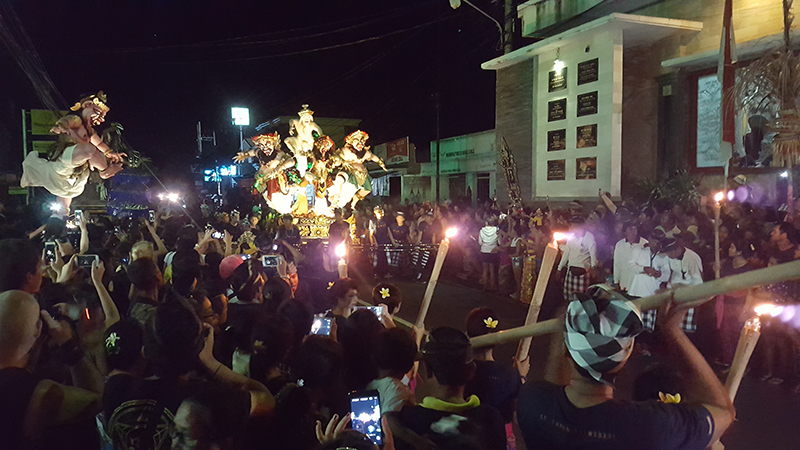 Banjar Taman Ogoh Ogoh preparing to march into the night

Other possible incidents during Nyepi are cases of theft, loud noises, and tourists and others that are caught outside during Nyepi. Last year an Englishman was secured by pecalang because he was seen walking on the Jalan Teuku Umar-Jalan Imam Bonjol crossroads, apparently trying to get home from Sanglah Hospital.  Pecalang also caught a drunk man riding a motorcycle on Jalan Mahendradatta, Denpasar. A Russian woman was found on a Nusa Dua beach after not being able to make it back to Ubud and also three foreigners were found in the airport confused and without money. (Supposedly waiting for their flights the next morning).


Police are also on the lookout for disorderly conduct, drunken behavior, modern music (gamelan is the only music allowed to be played during the parade) and clashes between opposing villages and youths.  “Denpasar Polresta has been monitoring Nyepi celebrations since yesterday and will be until March 18, with the help of related agencies. We will use preventive methods and law enforcement, so the Hindu people of Bali can celebrate Nyepi safely and comfortably,” he said to balipost.com.

There will be 1,130 ogoh-ogoh paraded and 1,907 police officers on the streets aided by local pecalang.