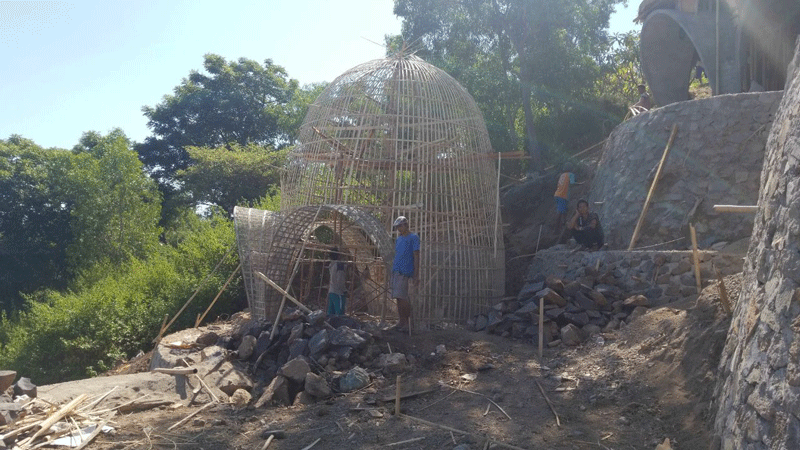 We spoke with Trev Chee from the Mentigi Relief Effort [MRF] earlier today about what the next move is going to be in North Lombok and obviously an urgent need right now is shelter. Most residents are now sleeping out under tarps at night as the shakes continue.

MRF are planning to use part of the cash resources now coming in from donations for the design and construction of dome refuges using bamboo and thatch. Similar structures have already been built in the last year on the Mentigi Bay Villas nearby, were being used as rentals, and are perfect for the present situation.

“They will be something similar to this design,” he says, showing pictures of the bamboo structures on their property.

Trevor continues, “Members of the Mentigi Bay village are the ones who helped build our domes, so they already have the architectural skills and knowledge to build THEMSELVES. No outside engineers are required.”


The bamboo structures will be covered with thatch this time, as cement is hard to find, and they are well finished inside.

They will start clearing the land straight away and begin the building. I asked Chee where they proposed to build them. On the village land below or on the land now being used for temporary shelter?

This video was aired on Dutch Channel RTL4 earlier today

“The owner of the land is offering to provide a designated area to build the domes, which is on the hill side closest to the village.”

And it would seem the concept is very sound as the bamboo structures built last year have gone through three, recent major earthquakes, including the one earlier today, unscathed.

“All the bamboo domes on the hill are left standing and remain undamaged…while the whole village below is in ruins!! They have already survived three big quakes. This is why it’s the best design for shelters right now,” he concludes.

If you would like to help you can donate by clicking the link below.