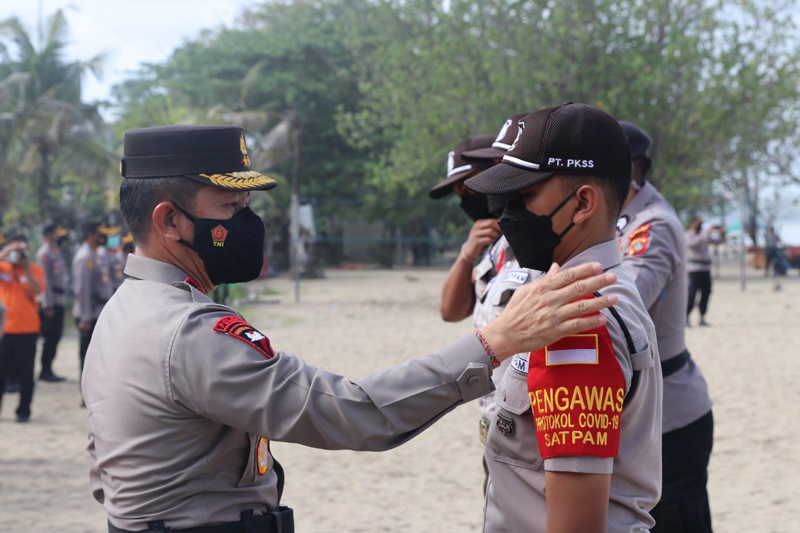 You may have noticed security guards around the island suddenly looking like police, even with the POLDA BALI badge on their khaki uniforms. Well, it appears they have become police.

Bali Police have mobilized all professional security guards throughout Bali to oversee the implementation of health protocols with the ‘PeduliLindung’ or ‘CareProtect’ application at their respective places of business, including tourist attractions.

According to an article in Nusa Bali this morning, if they find the ‘PeduliLindung’ app scan is black, then the guards must communicate this to the Covid-19 Handling Task Force.

The inauguration of the security guards becoming quasi police was carried out by the Bali Police Chief, Inspector General of Police Putu Jayan Danu Putra, at the Beach Volleyball Field on Kuta Beach, Monday (20/9) morning at 9am The inauguration yesterday was attended by dozens of security guards whose daily duties are in hotels, malls, government offices, and other public places in Bali.

Kapolda Putu Jayan Danu said in a release on the Humas Polri website, that the security guards will act as an extension of the Indonesian National Police, who are already involved with the Covid-19 Handling Task Force in their respective work environments. The security guards involved in this task are not only on duty in tourist areas, but also in private companies. The guards will be involved in carrying out strict supervision of everyone who enters their workplaces, through the scanning of the PeduliLindung application.

“Especially now in workplaces, offices, malls, public places, and tourist attractions, according to government recommendations, must implement the PeduliLindung application to monitor residents,” said Jayan Danu. “The guards will be well informed so that they can carry out their duties. They will check the results of the PeduliLindungi scan barcodes for every visitor in each workplace,” he added.

According to Inspector General of Bali Police Jayan Danu, even though Bali is currently implementing PPKM Level 3, it still cannot ignore the health protocols, and especially now as a new variant of Covid-19 has emerged. “It is hoped that involving the security guards will have a positive impact in the fight against Covid-19,” said Jayan Danu, at Kuta Beach.

There was no information on how long these security guards will remain police officers in the source stories. Ed

Meanwhile, regarding the local government’s plan to apply daily odd-even vehicle circulation restrictions to Sanur Beach and Kuta Beach areas, Commander Jayan Danu, said they are still waiting for the Bali Governor’s Circular (SE). In the draft, the regulation will apply to everyone, including those who live around the odd-even enforcement area.

The odd-even implementation is likely to start on September 25, 2021. Currently, socialization is being carried out while waiting for the SE Governor of Bali as the basis for the odd-even implementation. “This is not the will of the police officers, but there are rules. The goal is to control people visiting the Sanur and Kuta areas as these areas are mostly frequented by tourists,” he said.

The odd-even system, he said, is a government policy. This rule is applied according to the conditions of each region. Especially in Bali, the trial will be carried out in the tourist areas of Kuta and Sanur. Even then, it is not applied in all ways. The implementation is also only two days a week, namely Saturday and Sunday. The time is also only in the morning and afternoon, respectively at 6.30am to 9.30am and 3pm to 6pm.

More info on this traffic ruling when it is officially implemented.

Comments are only possible to make on the Seminyak Times Facebook page for the moment until we can find the solution to a problem with the comments plug-in on the website. Ed.