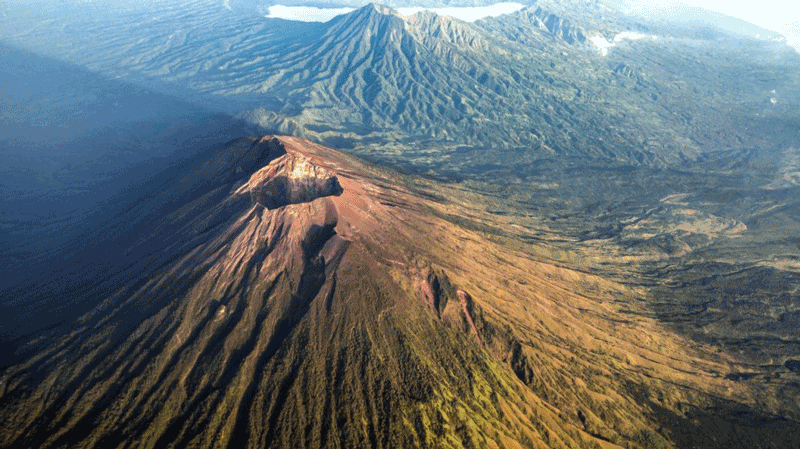 Image: Mount Agung in all its spendour. Credit: bookmundi.com

Mount Agung has erupted many times recently, but it doesn’t stop crazed climbers putting themselves in danger to get to the top. Even though the government has forbidden anyone climbing the mountain, several foreigners have tried to illegally climb it in recent times.

Yesterday, two Russian men, Jima, 38, and Arti, 30, tried to climb Mount Agung from Pasar Agung, Selat, Sebudi, Karangasem and almost came unstuck. Without a guide they climbed the mountain until 500 meters from the top.

At that point the mountain erupted and they couldn’t see anything because of the smoke. They decided to turn back, but after a while discovered that they couldn’t find the way down.

According to their story, they forgot the track down and mistakenly chose a different track and arrived at a cliff edge. Because they couldn’t find the way down, they screamed for help. Fortunately, some Yeh Kori residents, who were gathering grass and flowers below, heard their screams for help at around 7am.


They reported this to the head of Yeh Kori area, Gede Sudirman. After they held a meeting, they decided to assign three residents, Sudirman, Wayan Ariana, and Kadek Adi, to climb the mountain and pick up the foreigners. The two men were found them two kilometers from the mountain top, both exhausted, at around 11.45am. They were aided down through the Pasar Agung Temple track on Bebandem and then brought to Selat Police HQ for questioning.

One of the witnesses, Mangku Sugata, said that they were in fine condition but were exhausted. “They were shaking because the exhaustion,” he said to jawapos.com.

The men told police that they got information from social media that Mount Agung could be climbed and they didn’t know that it was on level III at this time.

The Centre of Volcanology and Geological Hazard Mitigation has prohibited anyone from nearing Mount Agung within a 4 kilometers radius.