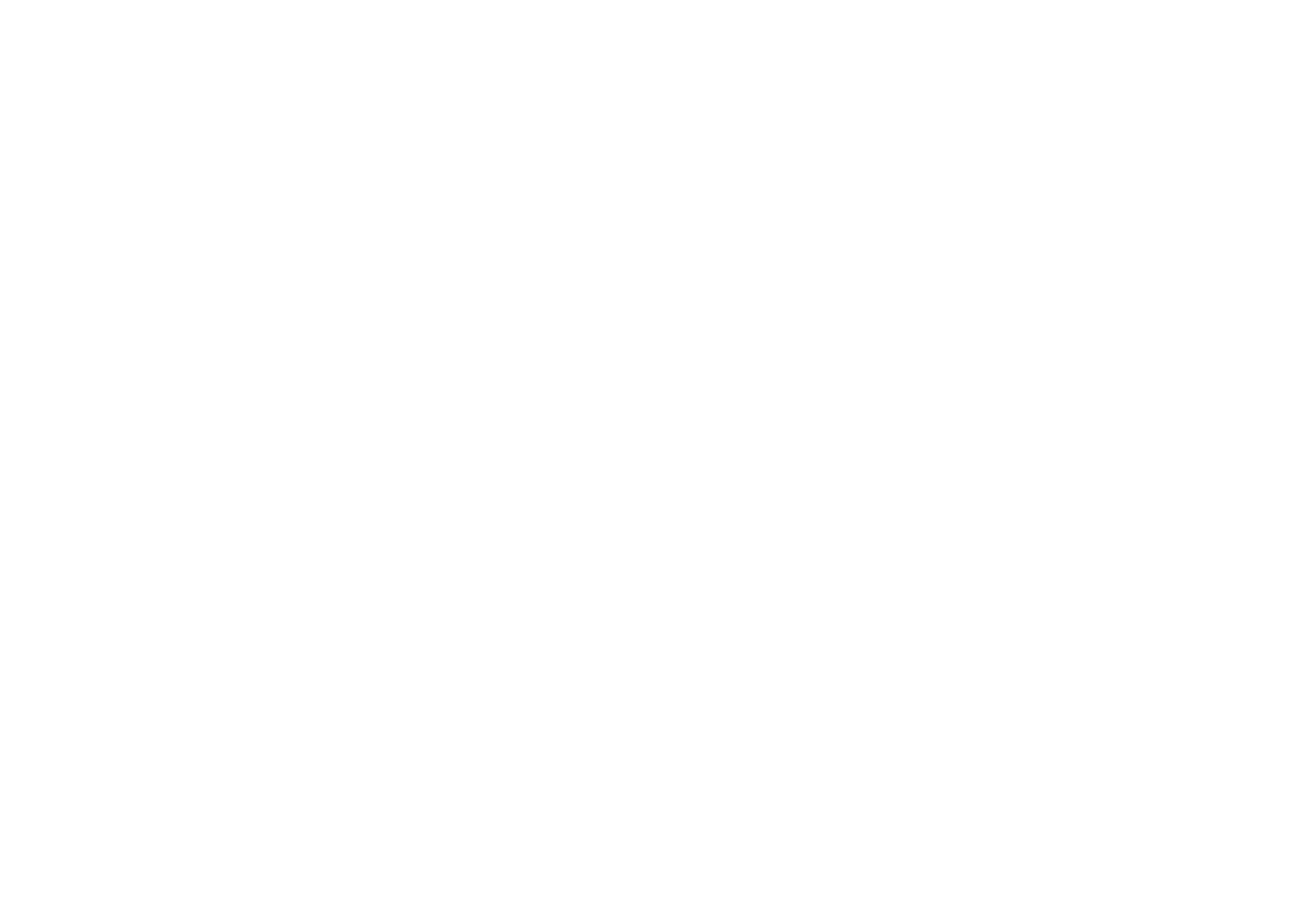 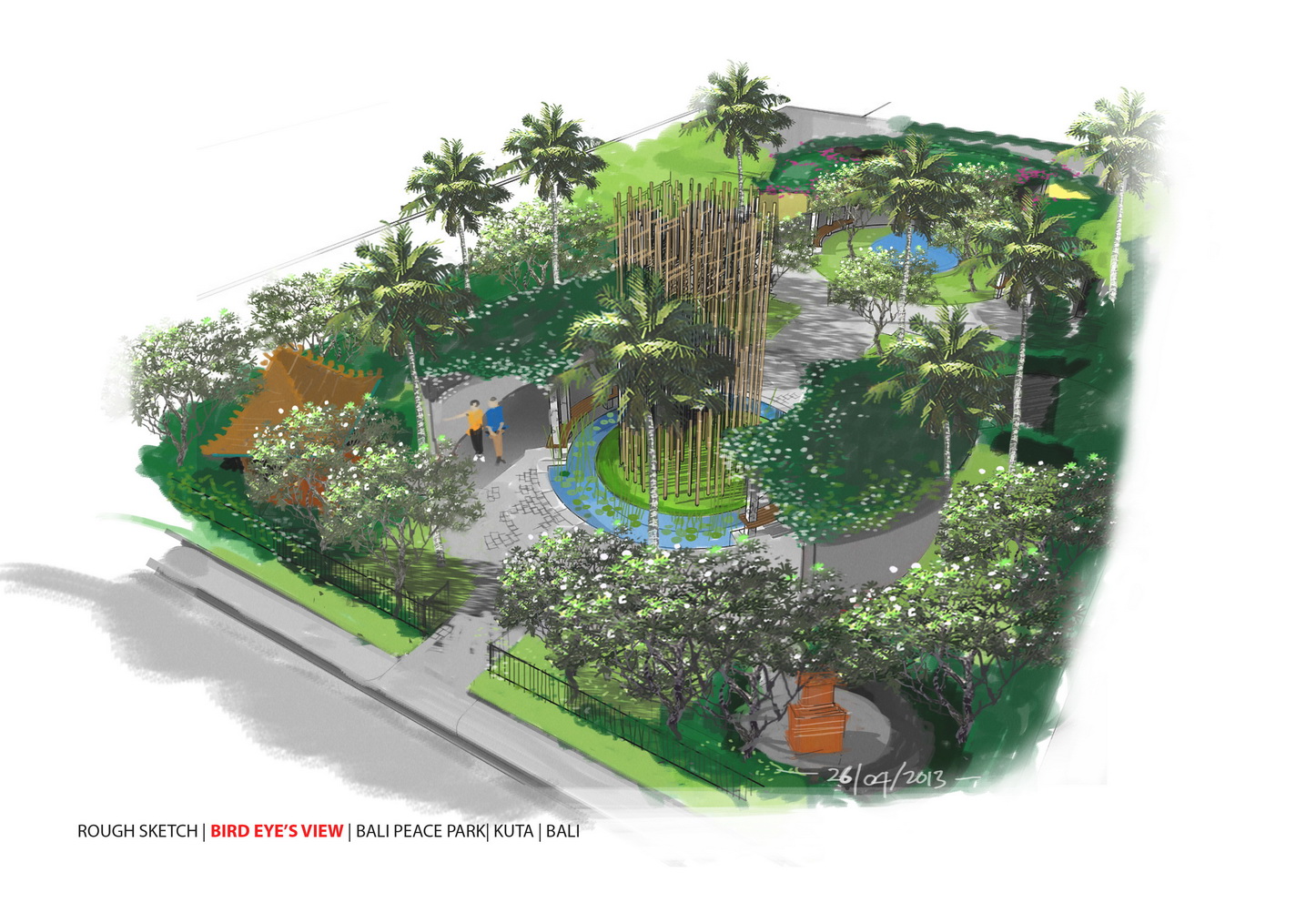 Image: The design for the Peace Park. Credit: BPPA

An Australian man, among many others, has been pushing for the development of a peace park on the Sari Club site in Kuta, where the first Bali bombings took place in October, 2002, for almost two decades and it now appears he may have got his way, or at least part of the way.

Australian press reported yesterday that finally a price for the sale of the land had been agreed upon with the owner.

The Australian man, Dallas Jackson-Finn — who founded the Bali Peace Park Association (BPPA) but fell out with its members recently — was able to negotiate a price on behalf of survivors and victims.

“We’re coming up to the 20th anniversary, so I think having that park there instead of looking at a vacant block of land is of great significance,” he told ABC news.

“It’s prime commercial real estate. We’ve factored in loss of income, compensation and the AUD 4.4 million works out at about 17 cents per Australian.”

Mr Jackson-Finn says design plans are ready for the proposed peace park, meaning that, if the sale goes ahead, the park could be finished in time for the 20th anniversary of the bombings in October.

“It will be a beautiful tropical garden,” he said adding that the design also incorporates a mural to tell the story of the bombing, and tranquil ‘reflection corners’ where people can sit and remember those who died.

There is one catch though and that’s where the money is coming from to pay for the site.

Before the last Australian election in May 2019, and just before building began of a new complex on the site, the incumbent Prime Minister, Scott Morrison said he was very disappointed and almost went as far as pledging the money for the site, saying that money had been set aside for the development of the peace park.

This garnered him much favour among voters leading into that election a month later.

According to the ABC, the Prime Minister offered financial assistance to buy the site, and now the federal government says “any new proposal would need to be formally developed and carefully evaluated”.

The Prime Minister’s Office is yet to say whether the Australian federal government will still honour its offer of financial assistance to buy the site, or whether it would contribute to the $4.4 million needed to secure the sale.

Former prime ministers Julia Gillard and Kevin Rudd both offered $450,000 towards the purchase of the Sari Club site.

State and territory governments previously matched this with their own offers — amounting to $450,000 between them — but it is unclear whether those offers still stand as it was all already a long time ago.

However, the opposition Labor Party has just yesterday upped their ante in favour of developing the project.

Yesterday they urged the government to allocate “sufficient funds in the budget” and to work with the Indonesian government and other stakeholders to establish the peace park before the 20th anniversary.

Labor backbencher Luke Gosling said the 88 Australian lives lost “and the scores more maimed in the Bali bombings of 2002 must not be forgotten”.

“The bombings were horrific,” Mr Gosling said. “Australia and Indonesia have a long history together and it’s in the national interest to have a Bali Peace Park built on the Sari Club site as a living memorial.”

In addition to this, a DFAT (Foreign Affairs) spokesperson told the ABC the Australian government has supported and assisted plans for the peace park and had previously been liaising with the Bali Peace Park Association (BPPA).

“The BPPA has informed the Australian government that the association has now formally and legally closed,” the spokesperson said.

“BPPA has terminated its interest in acquiring the land following prolonged negotiations and has indicated that Australian government-committed funds would not be required.”

In a recent letter to Mr Gosling, Foreign Minister Marise Payne also pointed out that a number of memorials to the Bali victims have been established in Indonesia, Australia and London.

By the looks of all this the discussion is yet anywhere near to be finalized, but for one, who was once on the fence in regard to this peace park, I really believe the timing could not be better to something peaceful, calm and new right now in the centre of Kuta.

And a final comment from Dallas just now in regard to all this. ‘I’m fighting for the victims’ families and the people of Bali for this project’. 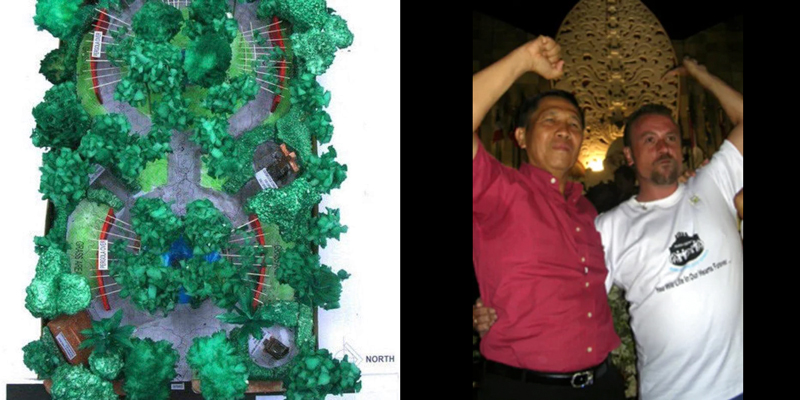