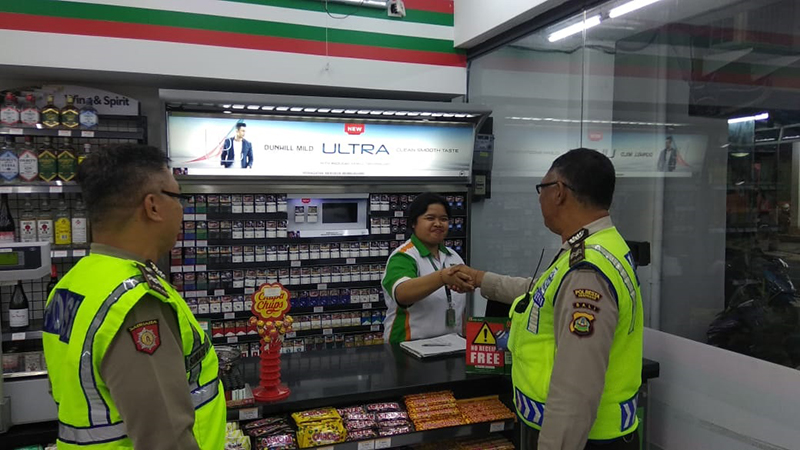 A Bali Polda officer, YKD, 24, was arrested after he tried to rob a convenience store on Jalan Nakula, Seminyak late Monday night. It was revealed that the man was drunk at the time and he managed to take Rp 441,000 from the Mini Mart, but the man who lives in Denpasar, was detained by the store employee, Gede Agus Suarjana.

When he wanted to enter the store, he saw an empty bottle and broke it. He brought the broken bottle into the Mini Mart and used it to threaten the employee inside, Gede Agus Suarjana.

“Give the money to me,” he said while threatening him with the broken bottle. The employee didn’t have any choice and gave him Rp 441,000 from the cashier. However, the suspect didn’t believe that was all they had and kept asking for more money.

Then the employee pretended he was going to take money from a drawer, but he didn’t give any money but threw a big book at him. The suspect began staggering and tried to make his escape, but the employee caught him at the front door. There was a fight and the suspect hit the employee with the broken bottle which injured his thumb. The employee didn’t give up and held onto his helmet until it came off the suspect’s head.


“Then, when the suspect tried to escape on his motorcycle, the employee threw the helmet which hit the suspect and he fell down to the ground,” said the source.

When he woke up and tried to run away again, he was surrounded by the employee and local residents. They secured him and gave him to Kuta Polsek to be arrested. Police also secured several pieces of evidence.

Meanwhile, the Head of Bali Polda Public Relations, Commissioner Hengky Widjaja, said that the suspect didn’t rob the Mini Mart, but he only tried to steal and threatened the employee.

“It wasn’t a robbery case, but theft with violence. He did it because he was drunk. He didn’t plan the crime. He found the bottle in front of the store,” he said on Tuesday.

The man is being held in Denpasar police headquarters and, according to Police Commissioner Ruddi Setiawan, he was not on duty at the time of the incident.