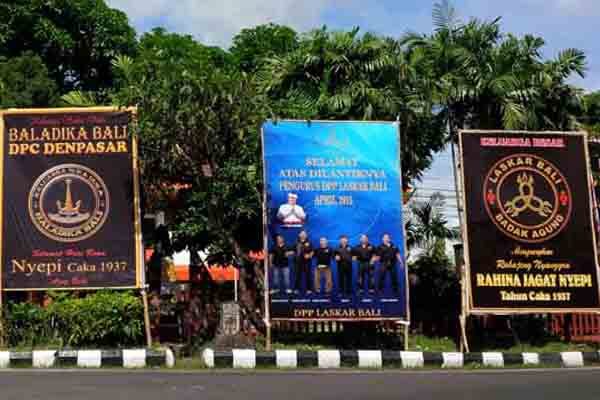 The police continued to clean up the attributes belonging to ormas (or local thug/preman organizations) in and around Denpasar over the weekend.

On Saturday (29/4), the West Denpasar and Denpasar police, took down jumbo-sized billboards at four locations, while the operation was secured by armed officers.

On Sunday, Gede Sumena, West Denpasar Police Chief, accompanied by the Head of the Crime Unit, Iptu Aan, said that they started removing the billboards at 6pm which involved 50 personnel. “As instructed by our superiors, Denpasar should be clean of ormas’ attributes,” Sumena said, as reported by Bali Post. “We will continue monitoring them.”

“The billboards were then taken to Denpasar police headquarters. The operation was safely finished, without incident by 7.50pm,” said the former Kintamani police chief.

On Wednesday last week (26/04), special armed troops, Sabhara (anti-riot squad) and Buser (Buru Sergap), conducted a sweeping operation at Jembrana, Tabanan, and Gianyar. The police were also aided by pecalang (the Balinese traditional guard) to help locate the billboards and other attributes around those areas.

Prior to the operation, Petrus Reinhard Golose, the Bali Police Chief, said that he would not tolerate any act of violence or thuggery from members of the mass organizations, insisting there will not be any form of organized crime on the Island of the Gods.