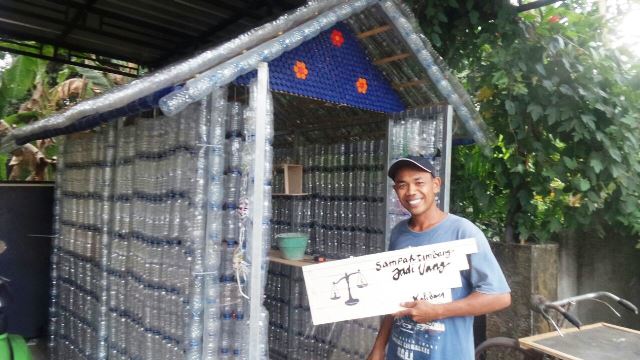 Ketut Budiasa (30) from Kalibukbuk Village, Buleleng is well known for his diligent collection of plastic waste in the area around Kalibukbuk village and Lovina areas.

“For years I picked up garbage, besides Kalibukbuk Village and Lovina coastal area, even outside the village, if I find the plastic waste I picked up,” Budiasa told Berita Dewata. He also gets creative, building things out of the plastic he finds, which will be displayed at the Lovina Festival from today.

According to him, handling the garbage problem is not just lip service and imagery for the sake of social media and politics, but sincere real action is required.

For him picking up plastic waste is not his livelihood, and acknowledges the financial return of picking up garbage is not much.

“As far as I know, 1 kg of plastic waste is sold for only Rp 1.350,” said Budiasa. He claimed that he just wants the environment free of plastic and hopes this can be followed by others.

Budiasa admitted that his activities are known by the village people including members of the Buleleng Council and he was also referred to as “Crazy” Budiasa when being an employee in the Buleleng District Government.

“These kinds of claims don’t bother me at all. Indeed, if calculated economically, picking up plastic waste won’t be able to meet your family needs because the price is very cheap,” explained Budiasa.

The bottles used to convert into plastic houses are now being visited by Lovina people, and Budiasa’s works will be displayed at the Lovina Festival from Thursday, September 14 to 18.

In the future, Budiasa wishes to be able to go to schools to invite the students to take care of the garbage. “For this one, I’m ready to buy plastic waste that they collect,” he said.