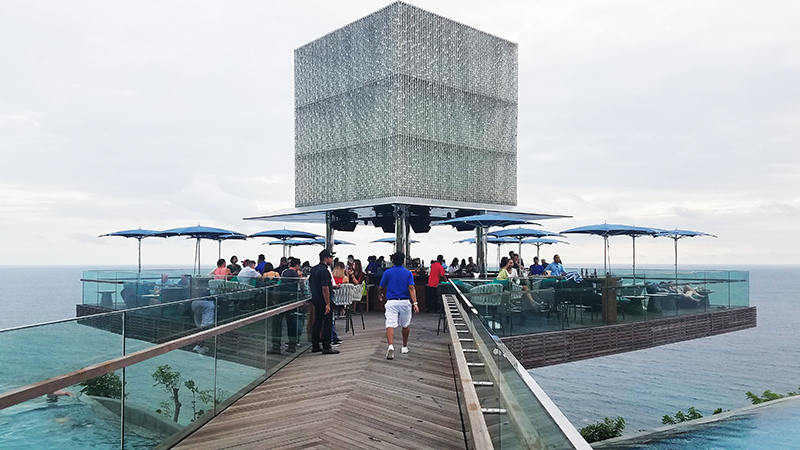 OMNIA Dayclub opens softly and in the process, Bali’s day/nightlife scene just went up a notch.

The Las Vegas and Abu Dhabi based entertainment and dining group Hakkasan, who are known for the high-end OMNIA nightclub which opened in Vegas in 2015 and multiple other deluxe hospitality outlets worldwide, have opened THE ultimate, luxury, outdoor club venue on Bali’s southern coastal cliffs.

The expansive, beautifully finished outdoor venue has a number of intelligently conceived features such as the centerpiece floating main bar positioned off the cliff edge and accessed by a small bridge, with sleek timber furnishings and stainless steel details creating a breathtaking space that could be one of the world’s finest. The rather large crystal cube on top of the bar is made from thousands of large glass beads, back lit by an LED lighting system which will eventually illuminate the sky at dusk, creating its own sunset effect. That lighting system will be launched very soon.

We were at OMNIA Dayclub Bali to experience their first day of operations. The staff have been prepared daily over the past months and according to Hugo, head marketing and conceptor with Hakkasan, specialist trainers were brought in from Las Vegas to train the staff to their high standards. “We could have opened earlier than this, we were ready, but we decided the staff were not yet prepared so we brought in the trainers from Las Vegas,” Hugo told ST.  This would appear to have been a good decision as the young, well-presented staff were right on point, from the greeting, serving, staying at a distance, and even paying the bill―seamless and without fuss. The OMNIA trainers should take a bow.

OMNIA Dayclub is built for a large crowd, and we are told there will be big events coming soon, but also it has enough intimate spaces to keep a smaller amount of guests entertained. A sunken swim-up pool bar to the left is like a secluded club of its own, the elegant blue and white day beds and sofas overlooking the main pool are ideal for hanging out in the sun or partying with friends. There are other booths and sofas dotted here and there, all creating their own intimate worlds. The main Japanese restaurant Sake no Hana overlooks the dayclub with its Zen styling and what they call ‘shun’ Japanese cuisine; ‘shun’ meaning the moment of perfection when everything is at its peak. A term which could well describe the whole OMNIA and Sake no Hana experience.

While speaking with Hugo in the space in front of the DJ booth, I noticed we were standing in the middle of the main dance floor, I spun around and could well imagine, sometime in the near future, hundreds of happy, stylish people dancing on that very spot with a major international DJ in the booth. We look forward to that day, which we are told is going to be in April when OMNIA has slated to hold their grand opening.

OMNIA Dayclub Bali is opening softly for the first couple of weeks from 11am to 7pm. It will be opening till later in the evening soon. Sake no Hana restaurant is open already till late – 11am to 11pm.

Make sure you take a look at this architectural and entertainment marvel soon, it’s sure to take your breath away.