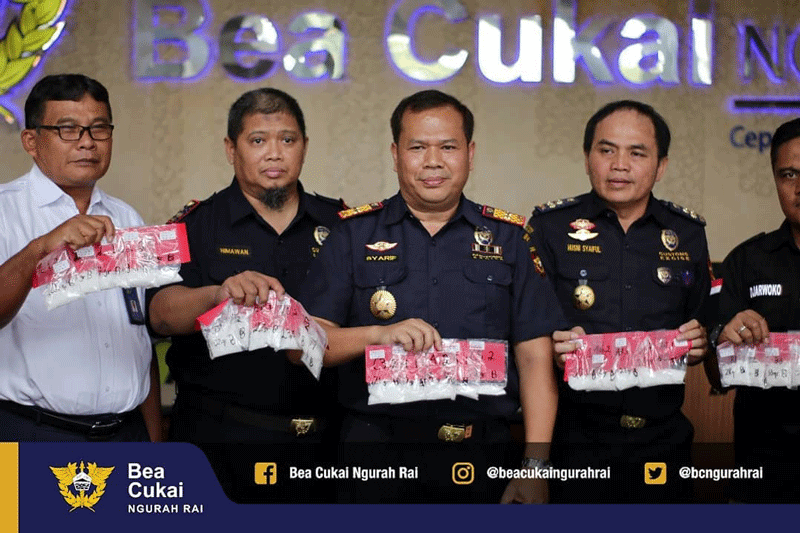 Bali Customs managed to arrest three foreigners bringing illegal drugs into Bali during July. They were from the Netherlands, the UK and Chile.

The first was arrested on July 1, 2018, when the Dutchman, 24, arrived at Ngurah Rai Airport on an Air Asia flight from Kuala Lumpur. Customs officers checked his luggage after something suspicious was found while being x-rayed. “We found four grey and square tablets of MDMA in his bag. He stored them inside a white plastic container and the total weight of these ecstasy was 2.63 grams,” said the Head of Bali, NTB, and NTT Custom General Directorate Office, Syarif Hidayat, on Ngurah Rai Custom Office on Wednesday.

The second occurred on July 12, 2018, on I Gusti Ngurah Rai International Airport Arrival Terminal I, when the Chilean, 34, arrived at around 9pm, also from Kuala Lumpur. When his luggage was x-rayed, there was a pack of marijuana seeds found that he brought from Amsterdam. “He works as an architect and a traveler. When the customs officer examined his orange bag, they found a pack with “The Bulldog Seeds” written on it, and there were five marijuana seeds with a total weight of three grams and a brochure called “Blueberry 420””, Syarif said to kumparan.com.


Syarif estimated that the seeds could produce 250 grams of marijuana in total, and “which could be consumed by 1000 people if one gram is consumed by four people,” he surmised.

The third arrest occurred on July 13, when the UK citizen, 26, arrived from Thailand on another Air Asia flight. “He stored the marijuana with a total weight of 3.55 grams in a plastic bag which he put that in his cigarette packet,” Syarif said.

One of Bali BNNP investigators, First Inspector AA Rai Parwata, said, “The British man said that he already consumed it for a long time, and the Chilean man said that the seeds should have been sent to the friend in Amsterdam, but he forgot and brought them here. We are still investigating that,” he said.

Syarif also said that Customs also discovered a large amount of crystal meth smuggled in 27 bags on July 24 at the Ngurah Rai International Cargo. “Our officers were suspicious with a package of 27 bags in the name of Lia. When we examined them, there was crystal meth in every bag handle strap, stored in a hose inside, and the total gross weight was 971 grams,” Syarif said.

Bali Customs and Bali Polda Narcotics Unit arrested N.A.M., 28, and his wife, Y.F., 25, at a house on Jalan Pemogan, South Denpasar, on July 25. The Vice Director of Bali Polda Narcotics Unit, Commissioner Sudjarwoko, said that the suspects claimed that they only received the goods and they were to send the packages to another person. “We are still pursuing the other suspect and we have already issued a search warrant,” he said to balipost.com.