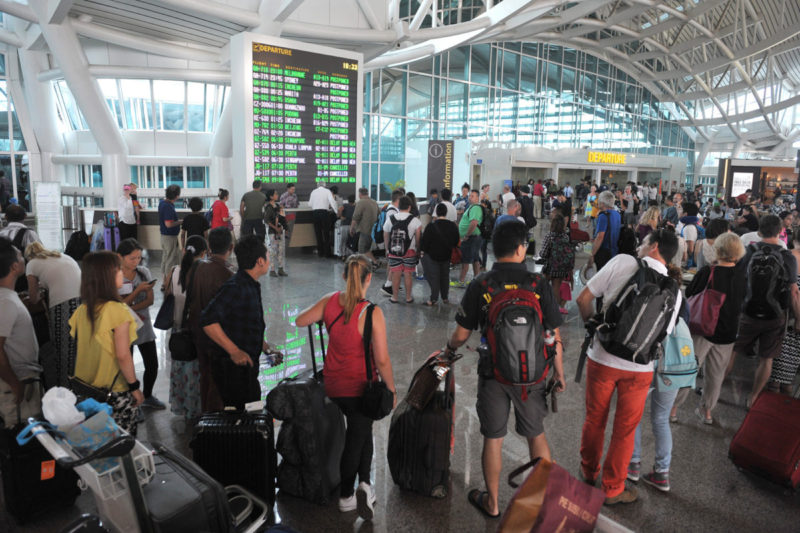 The Mount Agung eruption continues to increase and this morning at 6am the PVMBG (Volcanology and Geological Disaster Mitigation) rose the status to Level 4 ‘Beware’ which is the highest volcano status level. And just now it was announced that Bali I Gusti Ngurah Rai Airport is closed for the next 24 hours.

A statement from the PNPB this morning says the eruption has now risen from a phreatic to a magmatic phase. The magmatic phase eruption accompanied by constant thick ash has reached a height of 2,000-3,400 meters (which you can see here if not covered by cloud).

Continuous ash clouds are accompanied by explosive eruptions and weak booming sounds can be heard up to 12 kms from the summit. The rays of fire were increasingly observed during last night, which indicates the potential of a larger eruption is imminent.

For this reason PVMBG has raised the status of Gunung Agung from Alert (level 3) to Beware (level 4) this morning.

The exclusion zone has been widened in all areas within a radius of 8 km from the crater of G. Agung and added sectoral expansion to the North-Northeast and Southeast-South-Southwest as far as 10 km from the crater.

People within a radius of 8 km and 10 km of expansion are urged to immediately evacuate in an orderly and calm manner. Some people have been self-evacuating since 25/11/2017 night following the second recent eruption of Mount Agung.

The statement was signed by Head of Data Information and Public Relations BNPB, Sutopo Purwo Nugroho

Meanwhile Bali airport was just closed to air traffic. The airport has been temporarily closed from 7.15am this morning for 24 hours till 7am tomorrow as ash has been reported to be falling on the runway.

According to the public relations at the airport, Arie Ahsanurohim, “The air space has been covered with volcanic ash.”

Image. Stock ST image from the last time the airport was closed in 2016