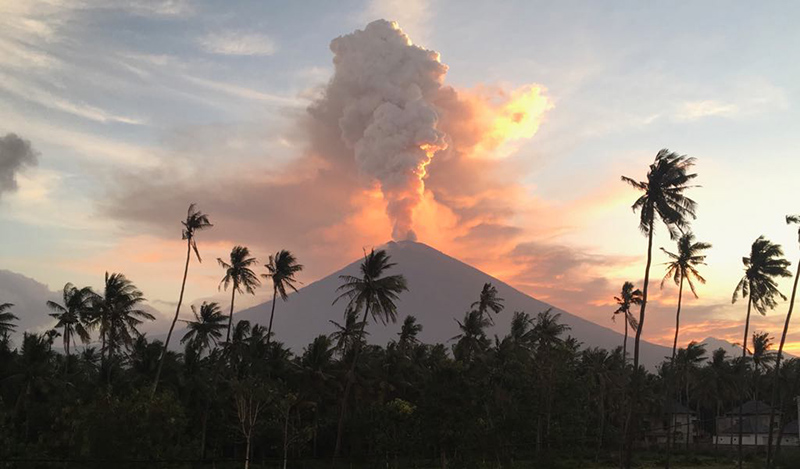 A statement from the National Agency for Disaster Management (BNPB) released this morning says that Denpasar Airport is closed and that Mount Agung continues emitting smoke and volcanic ash.

The statement reads, Mount Agung in Bali has emitted smoke and volcanic ash since yesterday, 28/6/2018 from 10.30am and continues this morning sending ash in a west to southwest direction. Himawari satellite data from BMKG shows volcanic ash has covered the air space coordinates of I Gusti Ngurah Rai International Airport.

Therefore based on a Coordination Meeting of the Mount Agung Impact Management Committee on flight operations at I Gusti Ngurah Rai Airport at 12.05 am last night it was decided to close the airport starting from 3am this morning until 7pm tonight. The next evaluation will be conducted today at 12 noon.

The closure of the airport is related to the safety of aircraft and passengers.


Since early yesterday evening, some airlines had already made the decision to cancel flights, including Air Asia, Jet Star, Qantas and Virgin. Other airlines were continuing to fly. But since 3am all flights are cancelled.

Meanwhile, the results of visual monitoring at Gunung Agung PVMBG Observation Post in Rendang, today at 6am, Mount Agung was still issuing volcanic ash with a stable intensity and the ash column reaching a height of 2,500 meters. A crater flame, reddish in color was also observed.

The status is still Standby (Level 3). There has been no status increase as yet. It cannot be estimated how long the volcano will be emitting ash. Currently micro tremors are still detected on the PVMBG seismograph which indicates the movement of magma to the surface.

A rapid increase of seismic amplitude has been observed within the last 12 hours. Low frequency earthquakes are dominating, manifesting near the surface emitting gusts of gases and volcanic ash.