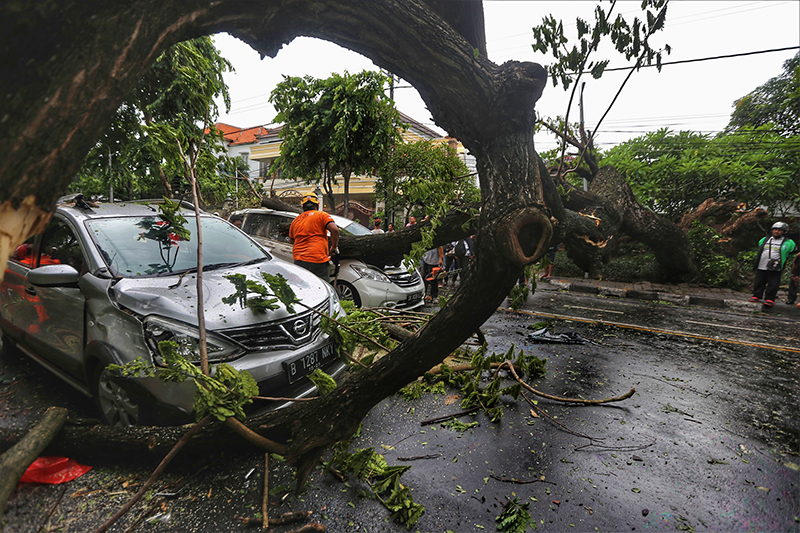 The heavy rain and winds around south Bali caused a horrible accident on Thursday afternoon. A local resident driving a Scoopy motorcycle, Taufiqi Hudaya, 28, died after an old pule tree fell on the man while passing along Jalan Raya Tukad Pakerisan, South Denpasar at around 5pm.

The pule tree used to stand at Banjar Kangin cemetery, but it fell onto the road because of the heavy rain and the strong winds.

“There were extreme weather conditions yesterday afternoon. The old tree couldn’t stand any longer and hit the victim while he was passing by,” said a witness, AA Putra, to jawapos.com.

The tree also hit the southern side of the Prima Bayu Medika drugstore wall and destroyed the garage. A witness, Aslaniati, said that it happened fast and there was no sign that the tree would fall. “But suddenly the tree fell and hit the motorcyclist,” she said.


Meanwhile, strong winds also battered the Kuta, Seminyak and Canggu areas. The wind was registered to blow 80 km per hour at one point, which toppled a street light on the Bali Mandara Toll Road. Toll Bali Jasamarga (JBT) Public Relation officer, Putu Gandhi Ginarta, said that it occurred at around 2pm. Fortunately, there were no victims, because there weren’t any vehicles passing by when the incident occurred.

“We only needed 20 minutes to handle the issue, so it didn’t disturb the traffic too much,” he said to balipost.com.

It was also reported that six areas of the PLN network were knocked out during Thursday afternoon storm. Parts of Seminyak were off way into the night being restored around 9pm in some areas.

The strong winds have now dissipated and everything is more or less back to normal.