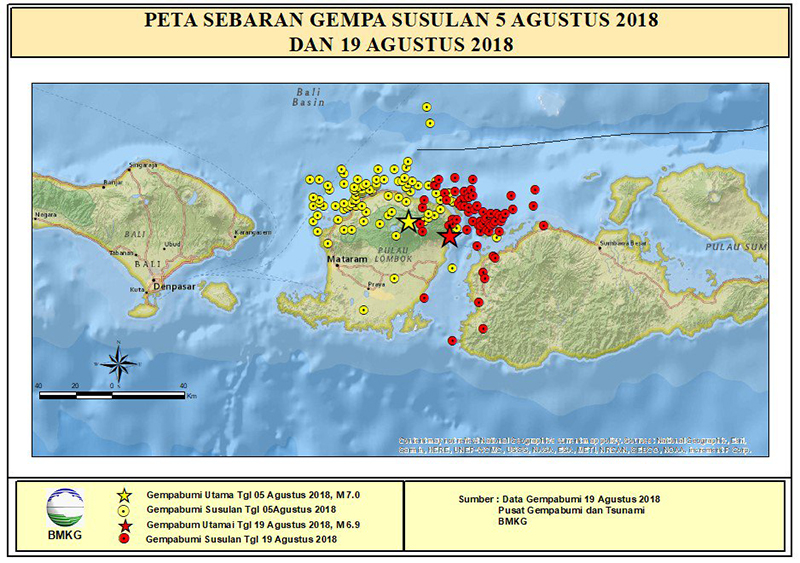 Image: This map shows the earthquakes from August 5 to August 19. Credit: BMKG

Four earthquakes above magnitude 5 RS rocked Lombok island and surrounding areas on Sunday night (08/19/2018), in a span of 50 minutes. And that was after two earlier quakes, 5.6 and 6.5 RS rocked the island at about 1pm (Bali time) the same day.

The first earthquake from the four with a magnitude of 7 RS hit 34 kms off the East Lombok coast, at a depth of 10 kms at 10.56pm and the rumble was felt in several neighbouring regions from Sumbawa, Bali, East Java to Makassar. The Seminyak area of Bali was shaking for approximately 10 seconds, which had most people running outdoors, including restaurants and hotels. No damage was reported.

In Lombok, the damage appears to be less than previous large earthquakes (possibly because most buildings that were going to fall have already done so), but there was a large fissure or crack appearing on one North Lombok road and the electricity went off directly, and on neighbouring Sumbawa a fire caused damage to a village after a fallen down building caught on fire. PNPB’s Sutopo twitted than one person had died on Lombok and one more on Sumbawa. Electricity is now back on in most parts.

There was no tsunami threat reported.

Please drop off you donated items to the following office location in Jalan Dewi Sri, near McDonalds.

You can also drop off goods to The Orchard, who have been doing great stuff over in North Lombok. There is also a donation box for cash donations.

Other Cash Donations can be made at Yayasan Agung Siaga