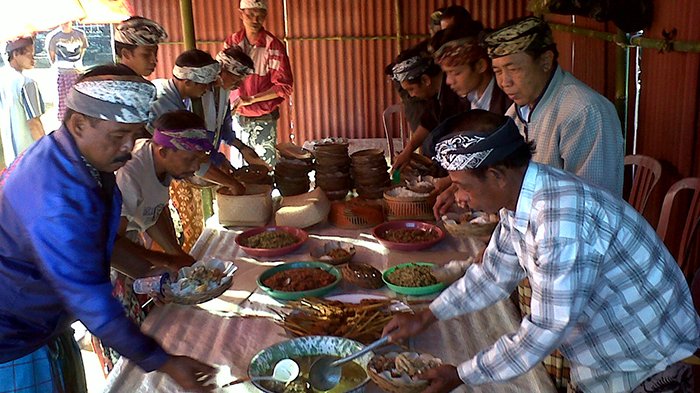 I Gusti Putu Sujana (65) suffered from high fever after cooking and eating pork-based food, lawar mentah and kuah komoh, on February 24 at his neighbor’s house during a ritual ceremony.

Sujana was showing signs of deafness, and was constantly agitated and short-fused. “We finally took him to the hospital, and after they examined and gave him antibiotics, they referred him to RSUP Sanglah,” said Wirata, the man’s nephew.

Not just Sujana, but another resident, Nengah Mungkrig was also suspected of contracting the disease and she’s currently undergoing treatment in RS Wisma Prasanthi. I Gusti Made Astawa, Kelian Dinas Banjar Pengayehan, noticed that Nengah Mungkrig had also eaten lawar mentah and kuah komoh made by Sujana. “She ate it during the ceremony, and her symptoms were the same: high fever and seizures.”

Astawa said that Sujana’s condition is getting better after previously experiencing high fever, seizures, and stiffness on the back of the neck. Meanwhile Nengah is still waiting for the doctor’s result.

Dr Ketut Nariana, Head of Tabanan’s Health Agency, said that there were two other patients being treated at BRSUD Tabanan suspected of having the meningitis and both had attended the ritual ceremony at Desa Gubug. They are I Made Sutayana (50), who checked in at the hospital after suffering physical and mental weakness, high fever, and deafness; and I Made Arimbawa (48) who complained of shoulder stiffness.

“Both have already been examined and now we’re waiting for the lab results. Made Arimbawa is also a pig farmer,” said Dr Nariana.