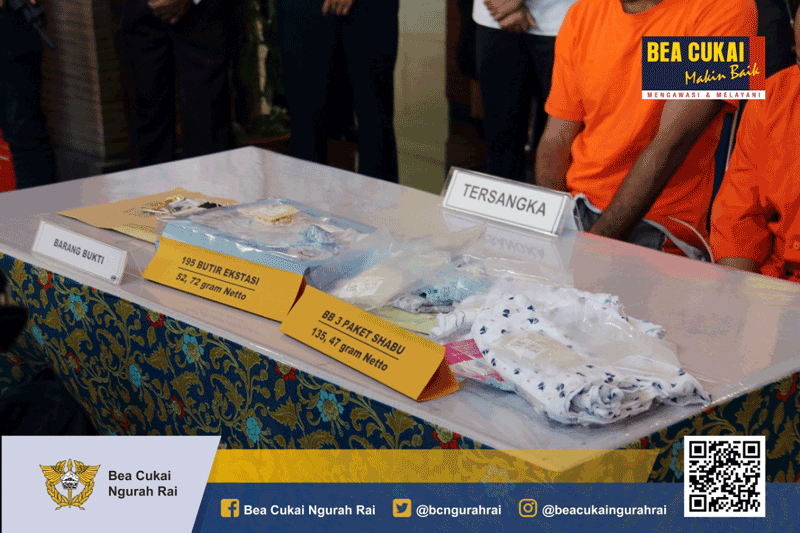 Ngurah Rai Customs officers managed to seize hundreds of pills destined for Bali recently. The drugs were smuggled in a package with baby clothing and were sent from Malaysia via DHL.

After investigating the situation, it was discovered that the package was sent by AW, 36, a gardener who worked at Harris Hotel on Sunset Road, Kuta. The suspect was arrested on Padalarang Market, Bandung, on May 30, 2019.

“We tracked down and arrested the suspect who tried to smuggle drugs thru an intermediary courier company,” said the Head of Bali Customs Enforcement and Investigation, Husni Syaiful, to beritabali.com accompanied by the Head of Ngurah Rai Customs, Himawan Indarjono, on Wednesday.


Husni said that his team received the package on April 16, 2019 from Malaysia. After they x-rayed it, they were suspicious of something inside the package, which was sent to AW who lived on Banjar Abian Timbul, East Denpasar. The address was the address of his wife’s convenience store. When they carried out a physical check of the package, a plastic clip with 99 blue pills with a weight of 27.58 grams and a plastic clip with 96 yellow pills with a weight of 28.64 grams in the package. They also found 167.66 grams of meth in the third pack.

“We tested them at the lab and it was proven that the package contained MDMA and Methamphetamine,” Husni said.

Customs coordinated with the Bali Polda Narcotic Unit who carried out a controlled delivery of the package. When the package was sent, the wife of the suspect said that the suspect worked as a gardener at the Harris Hotel on Sunset Road, Kuta, and they could meet him at around 7pm. However, when the team went to his workplace, the suspect had already left at around 3.15pm and his mobile phone was turned off. The man disappeared at this point.

Finally, the police discovered and arrested the man on May 30, 2019, while selling clothes on Padalarang Market in Bandung, West Java.

“The case has been submitted to Bali Polda Narcotic Unit to be investigated further,” he concluded.