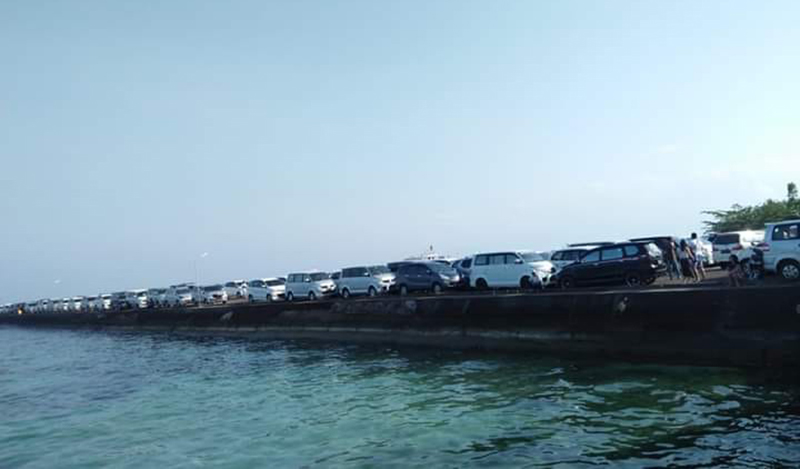 The rapid development of tourism on Nusa Penida has caused many issues and none bigger than the massive traffic jams on the island in the past week. For the first time, roads were full of vehicles for the whole week during Lebaran holidays and has caused a stir within the local transportation authorities.

The Head of the Klungkung Transportation Authority, Nyoman Sucitra, said on Friday that his side was already controlling traffic jams on Nusa Gede, Lembongan and Ceningan. However, his team hadn’t predicted traffic jams on Nusa Penida, so he could not give a short term solution to overcome the problem. The traffic jams continued till Sunday.

However, Sucitra said that the phenomenon would be discussed now to anticipate similar incidents in the future. His side will discuss it with the Traffic Forum, which consists of the Transportation Board, police and army officials. “Our task is only controlling the traffic. The tasks of widening the roads and other options is the responsibility of the Klungkung Public Works and Spatial Planning (PU-PKRP) Board,” he said to balipost.com.


The Head of Klungkung PU-PKRP Board, A.A Gde Lesmana, said that the traffic jams have been observed by related parties and his side is ready to support the tourism development according to their main task and function, including road widening. But he reminded reporters that the regional budget was limited and some access roads should be prioritized first.

Lesmana said that Public Works has been observing the conditions and there should be communication about solutions with village leaders and local residents to avoid similar problems in the future.

“We are still discussing it and will analyze which land we should buy. We are mapping the land to decide which roads need to be widened. And the Klungkung Regent’s idea to construct a Nusa Penida ring road should be discussed too. We are still discussing with the Transportation Ministry about the construction of that road,” he concluded.