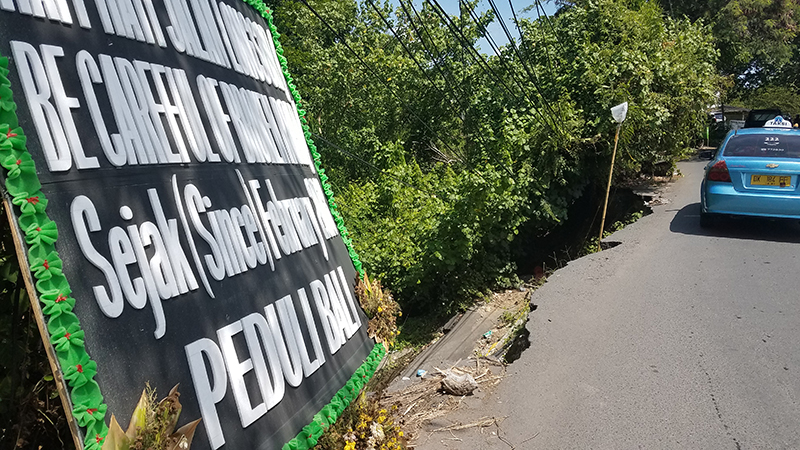 Image: Half the road missing on one of the busiest roads in Canggu. Credit: ST

A section of Jalan Subak Sari, heading towards Canggu Club from Batubelig, has been damaged since a couple of months ago, with almost half of it sliding into the nearby river after heavy rains and flooding back in February, but Badung regency still hasn’t managed to fix it and local residents have had enough.

The slow response has annoyed local residents so much so that they put a wreath-type banner adjacent to the damaged road which states “Be Careful of Broken Road since February 2018; Care For Bali.” As you can see above, the words are written in both Indonesian and English.

The Head of Badung Public Works and Spatial Planning (PUPR) Dept, IB Surya Suamba, admitted that they still haven’t fix the road because they are still negotiating the price of the land to fix the 10 meter stretch of road.


“The land belongs to someone that has already contracted it to a third party for 30 years, so we cannot fix it until we have permission from the land owner,” he said to balipost.com on Friday. 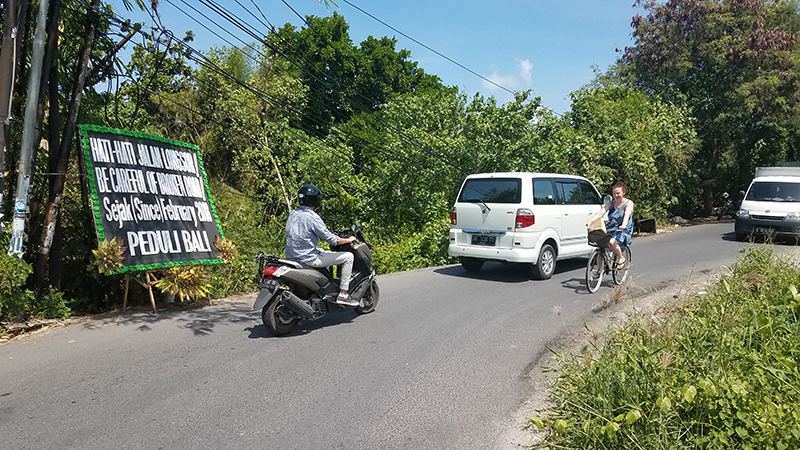 He also said that the department had been working hard to find a solution to fix the road. They have coordinated with the village heads to find the best solution, too. “We have been coordinating with North Kuta district council to mediate with the tenant, because legally the land belongs to the tenant since the land owner contracted it to the tenant. According to some information we have just received, though, the tenant has given us permission to fix it,” he said.

[It’s not clear if that last statement means the reparation will happen soon or not. Ed]

The residents and local drivers using the road have been complaining for months about the road condition, as it is now becoming very dangerous for the road users.

The road connects Seminyak to Berawa and the rest of Canggu, which has become a major tourism area with much traffic going in both directions.