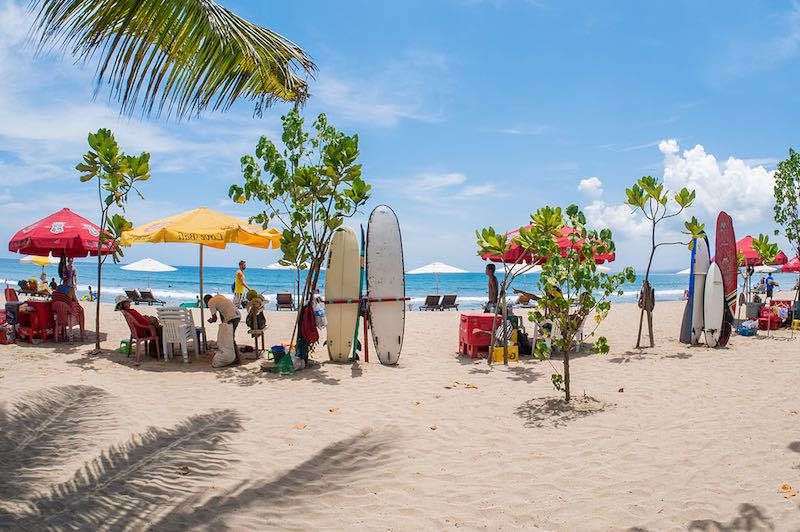 Kuta Beach will officially open to the public on Thursday, July 9. The local village, which managers Kuta Beach, say they have prepared various facilities and changes according to the Covid-19 health protocol, to welcome the new normal on the world famous beach.

To begin with they want to organize the beachside traders. Although the beach is open to the public, local traders will not yet be allowed onto the beach to sell their wares. Traders will be allowed to sell again once the customary village has finished arranging their situation.

Head of Kuta Village, I Wayan Wasista, explained to Nusa Bali that at the opening day of the Kuta Beach area, traders will not be permitted on to the beach. According to Wasista, the reason for this delay is that before the emergence of the Coronavirus outbreak, the condition of these stalls was far from neat and unorganized, so they want to arrange the stalls in accordance with the latest health protocol standards.

“We have already socialized this to the traders,” said Wasista on Monday (6/7) afternoon.

According to Wasista, there were 1,168 traders who were scattered along Kuta Beach and the village wants them separated and better ordered.

“All this time, the traders have had their own stands. Therefore, at this time we continue to coordinate with related parties including the Badung government to find solutions and make arrangements,” explained Wasista.

Also according to Wasista, the beach trading arrangement has already been discussed for some time, but until now has not been realized.

The Badung Regent, I Nyoman Giri Prasta checked the readiness of the Kuta Beach area on Friday (3/7), and said that Badung was ready to organize and create a concept in making the traders’ stands. However, Kuta Village is still waiting for further coordination from the Badung government.

Regent Giri Prasta said they planned to arrange the coastal areas of Badung Regency in accordance with Law No. 1 of 2014, in which the district government was given the authority to manage land and coastal areas. As part of this, beach traders with a Badung ID card will be made a permanently place to sell the goods and services while maintaining the surroundings clean, neat and hygienic. The beach will also be equipped with public toilets with facilities the equivalent of 5-star hotel toilets.

“Everything we do is to provide the maximum comfort for tourists. The young generation of our coastal area has been empowered to manage the beach, so that the Badung people really become their own hosts. In the beach structuring process we will also involve local community leaders, so that its development also accommodates the needs of the surrounding community,” said the Regent of Giri Prasta at that time.

In anticipation of the new normal starting on July 9, the management at Kuta Beach have made various preparations. One of them is installing dozens of wash basins at the entrances to the beach. In fact, in order to make it easier to control visitors, only four entrances to the beach are to be opened and guarded by Jagabaya and beach guards.

Wayan Wasista explained that from the results of the previous verification carried out by a Badung government team, Kuta Beach needed to add more places to wash hands. Because, until now there is only one place to wash hands at each access point.

“Previously there was only one wash facility for each entrance, and every 200 meters another place to wash hands. Now, we have added four handwashing stations, both at the entrance and in the area. There are dozens of them now,” Wasista said, Monday (6/7) afternoon.

“In regard to the officers at access points, everyone is equipped with PPE (personal protective equipment), ranging from gloves, face shields and masks. Because they are dealing directly with tourists. They will also be equipped with thermo guns or body temperature check tools,” said Wasista.

The guards are on the front line in checking tourists who want to visit the beach. Thus, they are also being trained in how to deal with visitors whose body temperature is above 37.3 degrees Celsius. These guards are trained for the evacuation process in coordination with the Puskesmas staff.

According to Jawa Pos, all Kuta beach guard personnel will be deployed with the assistance of 25 village officers. Officers will later be divided into individual teams, with each shift containing 15 task force personnel and officers.

In addition to all this, loudspeakers along the beach will be activated every 15 minutes, informing visitors of the health protocols while on the beach.

“In addition, officers will also continue to monitor tourists in keeping their distance, wearing masks and always washing their hands. We have trained all officers for the procedures that must be carried out during the new normal period,” said Wasista.