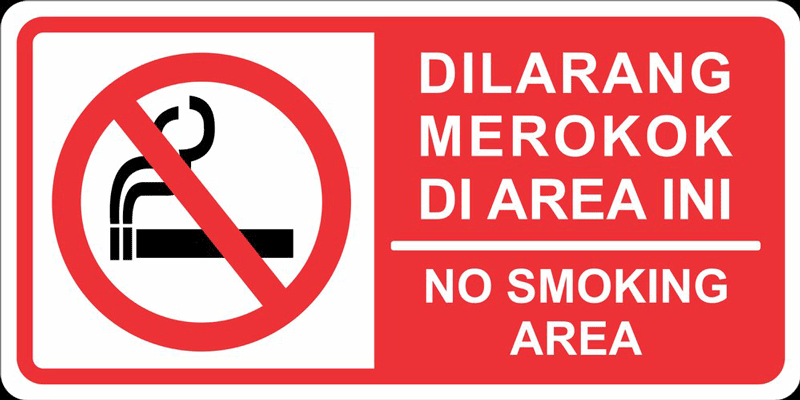 Image: No smoking in this regency please. Credit: bukalapak.com

When the regent saw the advertising, he decided to enforce the regulation himself. At that time, there were several cigarette promotion stickers that were sized around 45 cm x 30 cm on the warung tarpaulin front. Half of the tarpaulin was filled with old and new cigarette advertising stickers.

“I was shocked. Klungkung has been declared a regency free of cigarette advertising with non-smoking areas (KTR), but I still found several cigarette adverts and they were new,” said Suwirta to radarbali.com.


He went to the warung and tore the stickers from the walls with the help from several Klungkung Satpol members who accompanied him. He also advised the warung owner to refuse any form of cigarette adverts, because Klungkung has been stated as KTR and it has been written into law with regional regulations.

“These regulations are the first step for us to monitor smoking in the area. I cannot forbid a person from smoking, but I can enforce the regulation to protect the people who don’t smoke and remind the persons who smoke to reduce or stop their habit,” he added.

He also warned the cigarette manufacturers and distributors to stop displaying cigarette adverts in the Klungkung area and he would give sanctions to whoever violating the rules.

Meanwhile, the Head of Klungkung Community Police and Fire Department, I Putu Suarta, said that his team often monitors and enforces the cigarette advertising regulation. Many of the cigarette adverts were attached to warung tarpaulins. When they removed them, new ones soon after replaced them.

“Some of the warung owners even didn’t know who stuck the stickers up. We will visit Klungkung cigarette distributors and discuss this and increase the socialization about the cigarette advertising ban and the regulation to enforce it, too,” he concluded.