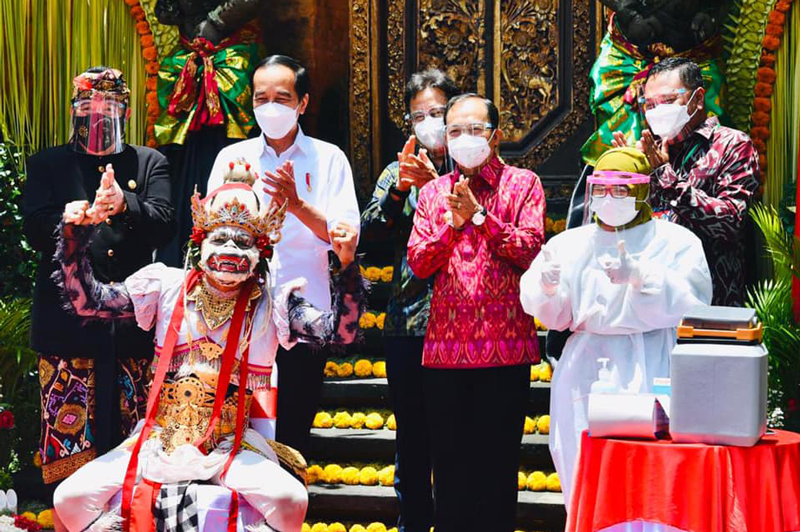 It would seem the Indonesian government is getting right behind the opening of the three green zones in Bali in order to start the reopening of tourism on the island. The idea was first proposed by the Bali provincial government last month, with many thinking it could be another ‘pie in the sky’ idea from our friends in Denpasar.

President Jokowi coming to Bali to oversee the vaccination program in these green zones this week is seen as solid evidence that their idea is really going to bear fruit this time around.

With the local, and many tourist-centric economies around the archipelago in tatters due to the COVID-19 pandemic and the lifestyle restrictions, the central government is seeing the Bali green zones as a solution for other parts of the country, too.

The three green zones include Ubud in Gianyar Regency, Nusa Dua in Badung Regency, and Sanur in Denpasar City.

The government started mass vaccinations of tourism employees in two of these zones last week and in Ubud yesterday.

“We should be grateful that the vaccination process has started simultaneously in Bali Province in regencies and cities, and we hope that with the increasing number of people who have been vaccinated, tourism can be reopened soon,” Jokowi said while reviewing the implementation of mass vaccination at Puri Saren Agung, Ubud.

The hope is to restart local domestic tourism first followed by international.

A total of 680 tourism employees were vaccinated on the first day, yesterday in Ubud.

President Jokowi also highlighted his plan to conduct a weekly evaluation of the three zones specifically to review the implementation of the vaccination program and the conditions of Bali on the ground.

Vaccination programs for people involved in tourism, elderly and front line hospital workers are continuing all over the southern part of the island. Both local and KITAS holders are eligible for free vaccinations.

Meanwhile, new cases of Covid-19 reported yesterday by the Bali Covid Task Force were down to two digit numbers for the first time since November last year. There were still 77 new cases reported yesterday, which was a lot smaller number than the peak on January 26, 2021, where 542 cases were reported. Indonesia wide numbers are also down this week.