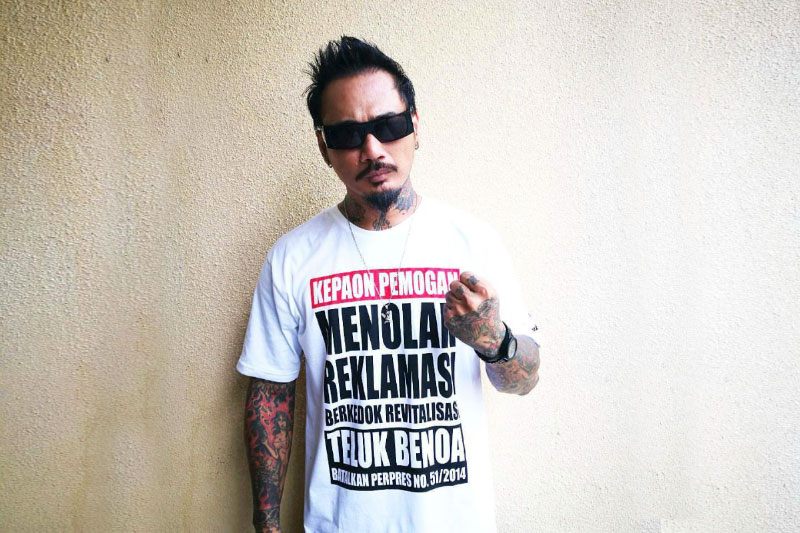 After walking out of the inaugural day of his trial at the Denpasar District Court on Thursday (10/9), the sometimes outspoken and controversial Superman Is Dead (SID) drummer, I Gede Ari Astina, better known as Jerinx, 43, has once again stopped the court in its tracks.

Through his legal advisor, I Wayan ‘Gendo’ Suardana, Jerinx, who is being sued for deformation and hate speech, has asked that the panel of judges who are hearing the case be replaced. This was revealed by his legal team when they delivered a letter to the Denpasar District Court on Monday (14/9).

“We have requested that the court replaces the panel of judges and immediately appoints a new panel of judges. And two, they grant our client’s request that the trial be carried out face-to-face, not by online trial or teleconference,” Gendo was quoted in NusaBali this morning.

Sobandi said that his party had received the letter. “We will study whether the judges should be replaced or not. We will try to find out if there really is a conflict of interest,” said Sobandi.

As is well known in the controversial case, Jerinx was reported by the Bali Indonesian Doctors Association (IDI) on June 16 to the Bali Police for allegedly insulting the medical profession through his Instagram account. In one of the posts, Jerinx wrote, ‘Because of being a proud lacky of WHO, IDI and the hospitals arbitrarily oblige all people who give birth to be rapid tested for CV19. There is already a lot of evidence that the test results are often incorrect, why do you force them? If the test results cause stress and cause the baby/mother to die, who is responsible?’

Meanwhile, the photo caption reads’ DISCONNECT IDI! I will not stop attacking you @ikatandokterindonesia until there is an explanation for this! Are people being pitted against IDI/RS (hospitals)? NO! The IDI & RS have pitted themselves against the people’s rights’.

A case involving the death of an unborn child in Makassar in June, whose mother’s subsequent hospital runaround after rapid testing positive to CV19 went viral as the cause of death on social media, has been refuted and claimed to be misinformation by doctors and the IDI since.

Before being named a suspect by the Bali Police investigators, Jerinx was examined as a witness, on Thursday (6/8) morning. At the time, the musician said he was not being offensive. According to him the post was a form of criticism and stated he will not stop criticizing as long as injustice occurs. Therefore he will not apologize to IDI. Jerinx was finally named a suspect and immediately arrested on Wednesday (12/8).

Jerinx, who has been delivering food to the needy with his people and organization from Twice Bar in Kuta since the beginning of this pandemic and been rather vocal in Covid conspiracy theories since the start has a legion of followers already protesting his present incarceration.

He and his legal aid, Gendo were also instrumental in halting the construction of the controversial Benoa Bay project recently that saw a huge amount of support from local Balinese people, banjars, tourists and government agents, and helped to stop possibly the worse environmental destruction Bali had ever seen.