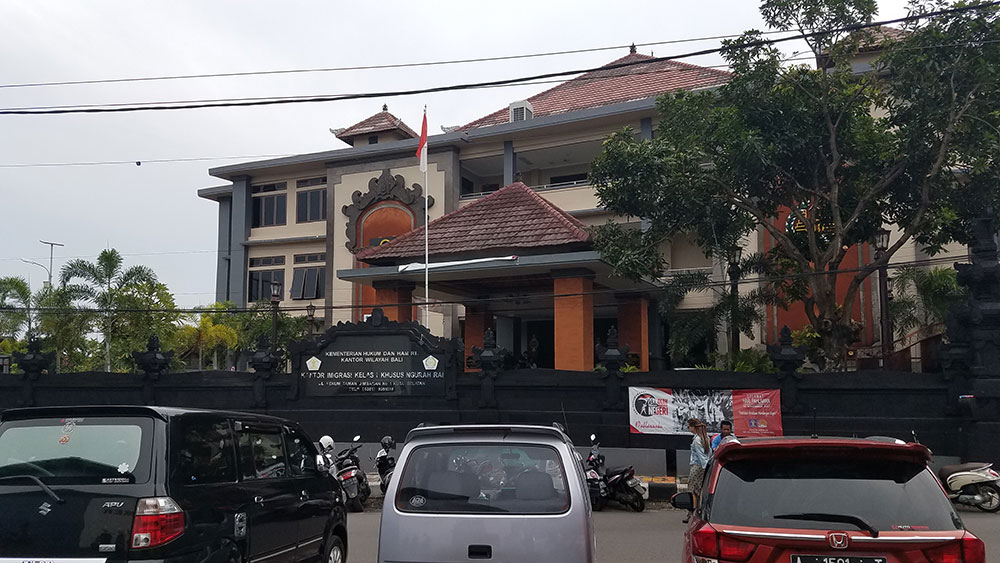 Many disgruntled local workers calling themselves ‘The Bali Career Fighters’ marched to the Nusa Dua Immigration Office on Monday to protest the many foreign workers working mainly as tour guides in Bali without the correct visas.  They were met by Immigration officials to discuss the matter that concerned them.

Meanwhile, Denpasar Immigration Office revealed data on Sunday, which claimed that many foreign tourists become illegal foreign workers on the island of Bali. They are illegal workers because they worked in many fields of the tourism sector, but only have a tourist visa.

“From our data, many of the foreigners who were deported in the last year worked as marketing officers while being in possession of a tourist visa. That of course is against the law, and we automatically deported them,” said the Head of the Immigration Monitoring Section of Denpasar Immigration Office, Ida Bagus Made Suandita when he spoke to tribunnews.com in his office on Sunday.

“Most of them were discovered after being reported by the community,” Suandita said.

Suandita explained that there are two types of Limited Stay Permits (KITAS) for foreigners; limited stay visas for working and for non-working persons. A non-working KITAS is usually given to foreigners who go to school, are volunteers or are retirees.

“We have also formed the Foreign Worker Monitoring Team (Timpora), which was led by the respective leaders of each department of Manpower, Immigration and related agencies. We inform each other, so if there is a violation, everyone knows,” Suandita said. He also said that the community can make reports via online to the Immigration Office.

“They can report it on our website, it is very easy now,” Suandita said.

Meanwhile, it was suspected that the number of illegal foreign workers arriving in Bali is related to the visa free program and foreign worker regulation simplicity. [It wasn’t clear in the original source who was making this totally unsubstantiated claim. Ed]

According to the data of Bali Manpower and Energy and Mineral Resources (ESDM), only a few of the foreign workers are registered and the number is too small when compared with the number of companies. Some of the companies did not register their foreign workers because they did not want to pay the Foreign Worker Permit and tax (IMTA).

“All of the companies that hire foreign workers must get a recommendation from Manpower. Then, the permit will be issued by PTSP. The workers hired must fulfill the rules of expertise and position of the foreign worker,” said the Head of Bali Disnaker and ESDM, Ni Luh Made Wiratmi.

A foreign worker must be a director or at a managerial level and cannot be in a lower position, such as a driver. Besides, they must be accompanied by a local worker so they can transfer skills and when the stay permit is expired, the foreigner can be substituted by a local worker.

But, according to Wiratmi, there is almost zero of the skill transfer going on because the foreigners themselves are unskilled and they cannot speak Indonesian, which was caused by the removal of The Ministry of Manpower Rule No. 35 of 2015, which said that foreign workers must be able to speak Indonesian if they work in Indonesia.

Meanwhile, the Head of Ngurah Rai Immigration, Amran Aris said that his department has formed four teams to investigate the illegal foreign workers on Bali. He hoped that those teams can collect the evidence within the next six months. “If I cannot find the evidence, and I was transferred, it means I have failed,” he said in front of the protesters at Immigration Nusa Dua yesterday, who were protesting foreign tour guides, who according to them, were operating without work visas in Bali.