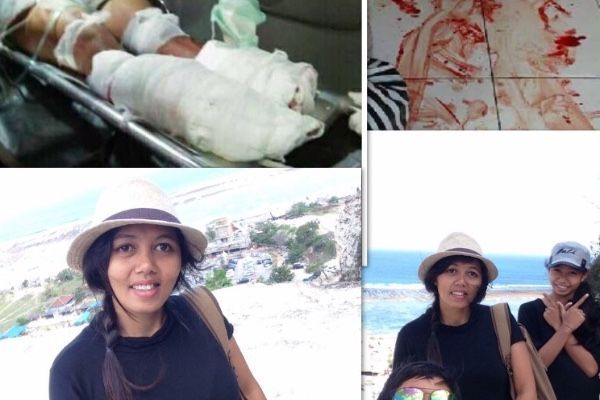 The sadistic act by a husband who cut his wife’s foot off and has made her disabled for the rest of her life, was sentenced to eight years in jail on Thursday. The panel of judges that was led by Estar Oktavi said at the Denpasar District Court that the defendant was proven to be guilty of extreme domestic violence. But the sentence was a year shorter than what the prosecutors had demanded.

Prosecutors had previously asked for a sentence of nine years in jail. The panel of judges described the factors that were considered in shortening the sentence, which were that the perpetrator was the husband of the victim, been polite in court and he had never been to jail before.

The articles that were used to sentence the defendant were article 5 point A, which is when a defendant performs physical violence towards his wife that causes her sickness and serious injury. The judges also applied article 44 paragraph 2 of Act No. 23 of 2004 relating to domestic violence.

The defendant, Kadek Adi Waisaka Putra, 37, from Alas Angker, Buleleng, was accused of physical violence against his wife, Ni Luh Putu Kariani, by attacking her when she was in bed at their homestay room on Jalan Uma Buluh, Canggu on September 5, 2017. According to court findings the barbarous act was born from a disagreement between the husband and wife. The defendant took a 31 cm machete and swung it at each of his wife’s legs in the bed. The woman tried to escape, bloodied, into the forecourt of the building, but the defendant chased her and kept chopping at her legs again until her left leg was severed.

This dastardly act was performed in front of the couple’s child and after the victim was helpless, the defendant took his wife to the hospital where she was operated on.

“Because of the defendant’s violence, the victim’s left leg was severed and she is now disabled. She also contracted chicken (or small) pox,” said the prosecutor according to balipost.com.

Asked after the verdict if the sentence of eight years gave her a sense of justice for herself and her family, Kariani reluctantly replied and reiterated what she had said before, I will agree with whatever the judge decides.

“If asked, I cannot answer because it is very private, yes I will leave the decision to the authorities,” she told Tribun Bali.

There is a Gofund page Kariani Here