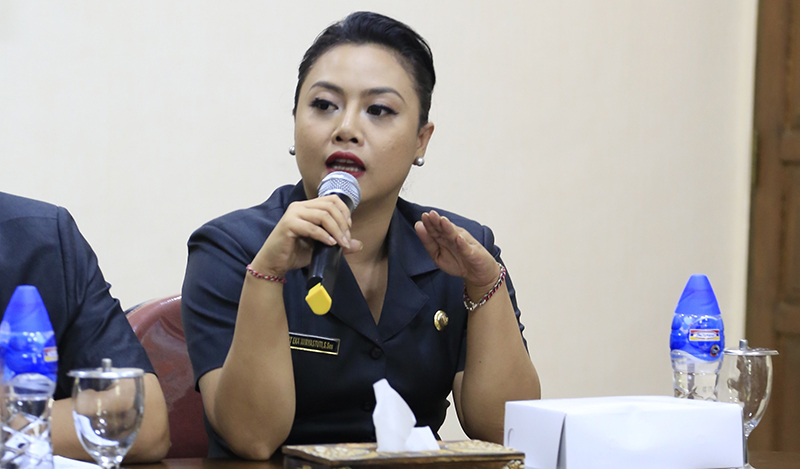 Tabanan Regent Ni Putu Eka Wiryastuti attended a coordination meeting with the Coordinating Minister for Marine Affairs, Luhut Binsar Panjaitan at the Ministry of Maritime Office in Jakarta on Tuesday (13/3).

Also attending the meeting was the Minister of Environment and Forestry, Siti Nurbaya Bakar.

The Tabanan Regent said after the event that the meeting was a declaration of war on garbage.

“In this coordination meeting we agreed to declare war on garbage in Bali. We will set up a team consisting of the Ministry of Environment and Forestry, the Director General of Sea Transportation, the Bali Police Chief, the Navy, the World Bank, and other heads of the regions of Bali,” said Regent Eka in what appears to be a communique to reporters.

She also committed the program to be fully implemented before the IMF-World Bank Annual Meeting in Bali, October 2018. She explained that the team will educate hotels and tourism sites to reduce the use of plastics, train people about recycling and turning waste into energy.

“In addition, the team will routinely conduct marine patrols and whoever is caught littering will be fined Rp 500 thousand. Bali is a tourist destination and so vulnerable to waste. With this teamwork, I am sure when the Annual Meeting of the IMF – World Bank, Bali is back clean of garbage,” said Regent Eka.


She also strongly supported (what they call. Ed) the wave energy program from the Coordinating Minister. “Pak Luhut and World Bank will facilitate us to build the wave energy plant that transforms waste into electrical energy and biodiesel energy. We will conduct further discussions as it takes 10 hectares of land and 400 tons of waste per day to operate,” she said.

Regent Eka hopes that with this cooperation program Bali can be an example for other provinces in tackling waste.

She added that Tabanan now has 19 garbage banks and one of the Tabanan waste banks also is working with a plastics factory. “So waste can be a reusable item and become a benefit,” he said.

Minister Luhut said that the issue of garbage is now the concern of the central government. It will work together to clean up the garbage in Bali which is now attracting the world’s attention.

“By inviting many parties such as the Minister of Environment and Forestry, representatives from the Directorate General of Sea Transportation, representatives from ITB Mutiara R Putri, the navy, the Bali Police Chief, the World Bank and more, we are looking together for ways to overcome the waste problem with one solution being the process of turning waste into energy,” said Minister Luhut.