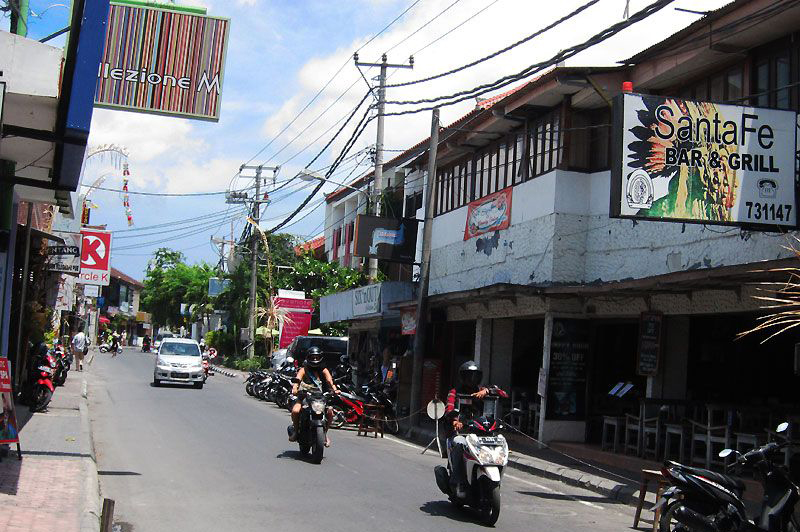 Four robbers posing as motorcycle cab drivers, who were based on Jalan Camplung Tanduk (Dhyana Pura), Seminyak, were arrested by police on Saturday (22/04). The police shot each of the suspects in the leg while resisting arrest.

The incident began when the four robbers were at their base on the left just before the busy bars on Jalan Camplung Tanduk.

Gathered all together, one of the suspects told the others about how a friend of his was mobbed by a local bunch of thugs in front of the Coco Mart in Legian, that night at around 3am.

“The man who was beaten up had previously mugged a transvestite at the same spot,” said an unidentified source on the field to reporters at Berita Bali. “They suspected she was the one who ordered the attack of FN.”

Upon hearing the story, the men were enraged and went to look for the transvestite. After finding her in front of Coco Mart, they beat her up badly and took her valuables including 2 iPhones, a Samsung smartphone, and IDR600k cash money.

The victim then reported the assault to the police.

Led by Ario Seno, head of the Crime Division, and his Deputy, Budi Artama, the police moved fast to search for the perpetrators. They were finally captured at Camplung Tanduk on the same day.

In the interrogation, two of the men confessed that they carried a sword and a knife as they attacked the victim. But the most surprising revelation was that the four suspects were also responsible for the mugging of foreign tourists.

Their MO was to take tourists as passengers and once they’re on the road, another man would tail them. After arriving at the destination, the group would attack the victims and steal their belongings.

“They’re all robbers posing as ojek drivers,” said the source. “Iwan and SM were the ones who robbed a tourist at Jalan Plawa, Seminyak.”

Based on confessions, around five months ago at Jalan Bypass Ngurah Rai, Kuta, on the south side of the Regional Office of Manpower (Disnaker), they stole a Kawasaki motorcycle and an iPhone.

“The victim of the incident reported that one of the thieves was carrying an airsoft gun. And after they stole his motorcycle and iPhone, they beat him up.”

From the arrest, the police secured a Honda Vario, Honda Beat, Kawasaki KLX, Yamaha Vixion, 2 knives, one sword, as well as the clothes, cap, and shoes worn by the perpetrators during the raid.

“Because they were resisting arrest, the four suspects were shot in the legs,” the source continued.