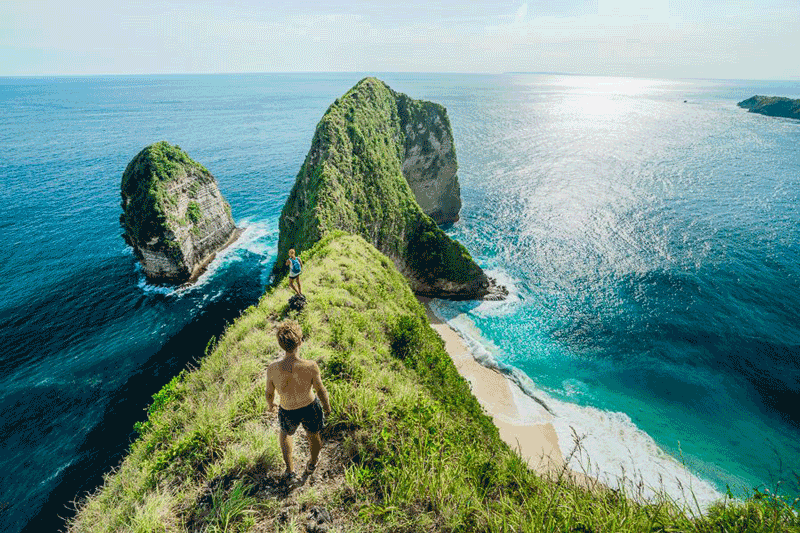 A Vietnamese man, Nguyen Hoang Hieu Dan, 26, drowned after waves swept him out to sea while he sat on famed Kelingking Beach, Nusa Penida on Sunday around midday.

Witnesses say that the incident began when the man arrived at Kelingking Beach with three members of his family on Sunday. They were relaxing and taking selfies on the beach.

The man was sitting away from his family on the shoreline. Suddenly, at around 1pm, what has been called a six meter wave crashed on the beach and swept him out to the ocean. The other family members were safe because they sat far from the shoreline. The man tried to get back to the shore, but according to witnesses, couldn’t resist the ocean currents. Other tourists tried to help him, including two foreign tourists who also saw the incident, but they couldn’t help him either and they were almost swept away by big waves too. Fortunately, they could get back to the shore.

However, the Vietnamese man was swept back to the beach two minutes later. Visitors on the beach tried to perform CPR on the man, but it didn’t succeed. It was then they realized the man was dead.


The incident was reported to Nusa Penida Polsek and the local police were joined by Nusa Penida SAR (Basarnas) members and Klungkung Regional Disaster Management Board (BPBD) members headed to the location to evacuate the victim at around 2pm.

“We needed an hour to reach the beach,” said the Head of Klungkung BPBD, I Putu Widiada, when speaking to by nusabali.com yesterday evening.

“It wasn’t easy getting information from the man’s family, either,” he added. Because of the difficulty in communication, said Widiada, the evacuation process also became difficult. The evacuation itself took several hours because they had to climb the narrow and steep path with the victim. “The evacuation of the man’s body was completed at around 5pm,” he concluded.

The body was taken to Pratama Nusa Penida Hospital for further observation, before being sent to Sanglah General Hospital, Denpasar.