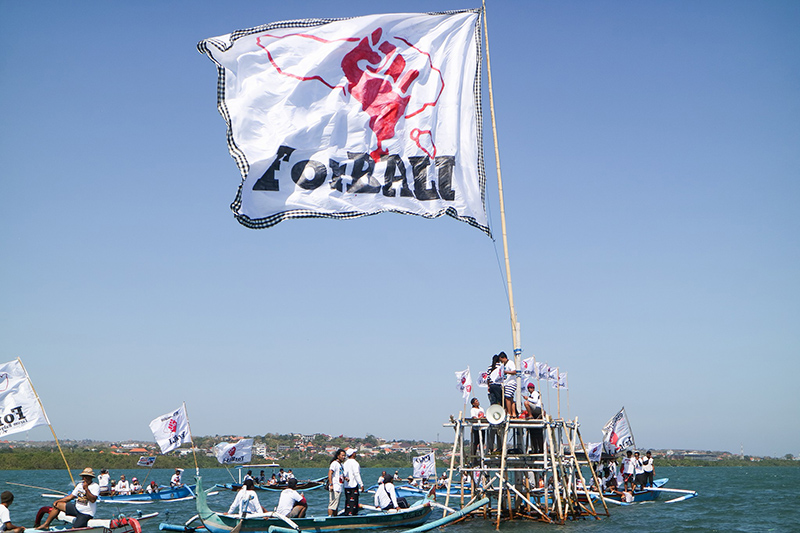 The Forum of Balinese Residents that Reject the Reclamation of Benoa Bay (ForBALI) continues to hold demos rejecting the Benoa Bay reclamation plan, which was initiated by the company PT Tirta Wahana Bali Internasional (TWBI).

On Monday, ForBALI members and followers came from several points around Benoa Bay and Sanur on boats and gathered at a bamboo tower to raise the ForBali flags in the Jimbaran and Mumbul waters.


Gendo also said that the gathering was held to show to the government that they are not afraid, even if they are poor. “By carrying out the demo two weeks before the local elections, we have proven that there is no election nor politic group that can influence us. The judgment day will be on August 25, 2018. We will keep moving and fighting,” he said.

The anti-reclamation protest movement has been active for the past five years. This year has become the judgment year because the location permit extension will expire on August 25. If there is no extension, which is issued by the Environment and Forestry Ministry, then the location permit will be invalid and PT TWBI cannot extend it anymore.

But, the development company’s chances would completely vanish if the central government removed the Presidential Decree Number 51 of 2014. This is what ForBali, Gendo and the majority of Bali residents appear to be hoping for.