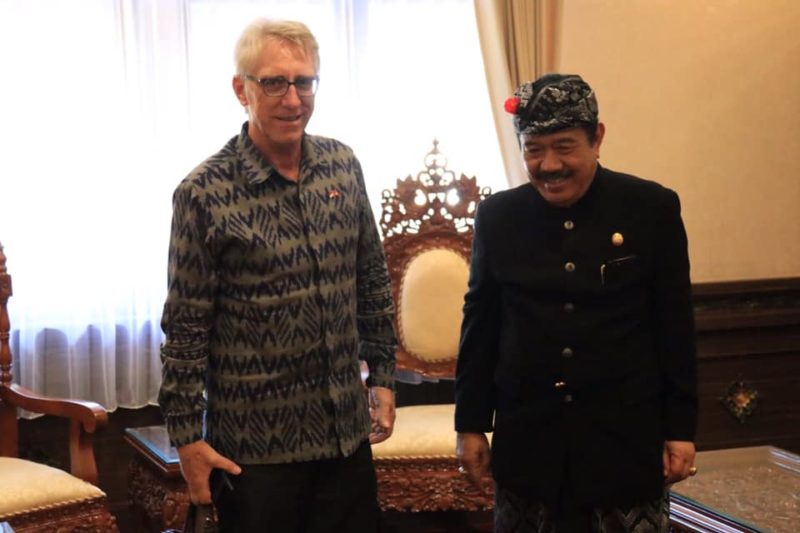 Promotion of Bali tourism in Europe is considered to be increasingly rare in the countries of the region and according to the Swiss Honorary Consul for Bali, Gerhard L Nutz, this can be felt from the declining number of European tourists to Bali seen this year, especially in the past high season of July-August.

Mr Nutz is pushing for promotional activities to be intensified in order to attract European tourists to vacation on the Island of the Gods. According to him, European tourists are currently turning to Sri Lanka or Vietnam.

“Both countries are on the rise because they are only eight hours to travel by plane.  And in addition, the countries also have beautiful landscapes, just like Bali and unique cultures,” he explained to the Deputy Governor of Bali and Head of Bali Tourism, Tjokorda Oka Artana Ardhana Sukawati (Cok Ace) at a meeting in Denpasar on Tuesday (01/10/2019), which was quoted by BaliBisnis.com.

Regarding Bali, he also acknowledged that the problem of traffic jams and rubbish has become a sizable issue in Europe. With this in mind, he encouraged the Bali Provincial Government to immediately fix these two problems.

“If you want a comparative study of waste management, you can see it in the cities of Milan and Florence, Italy. A few years ago, the two cities were very dirty but now they are clean and far more organized,” he explained.

Responding to this information, the Bali Deputy Governor said he appreciated the discourse while saying that the provincial government has been managing the waste and sanitation system in Bali.


He made the example of several points, especially tourist areas, like Ubud decades ago being very dirty, and with education, government programs and citizen awareness, it can now be seen that Ubud is cleaner and better organized.

He ensured that his government would focus on boosting infrastructure development and waste management for the convenience of the public and tourists.

He stated that currently a universal master plan for the development of the Bali is being drawn up, which is concerned with not only the buildings and land of Bali but also the people and nature in accordance with the vision of Nangun Sat Kerthi Loka Bali.

One part of the vision is the development of tourism.

Additionally, there are efforts to preserve the customs and culture through the use of traditional clothing and Balinese language and characters, the government is currently continuously building infrastructure and environmental cleanliness through the Bali Resik program and limiting the use of plastics.

“That, of course, will aid the comfort of tourists and facilitate access to tourist attractions,” he explained.

In regard to developed countries, and with the aid of taxes paid by the people, those countries have managed to process and sort waste. However, Cok Ace claimed he did not want to fully adopt the same system.

He stressed that he wanted to develop a mutual cooperation system and Menyama Braya which has become a legacy in Bali in managing waste. And also was concerned that if all are served from the tourism dollar, the community can become spoilt and complacent, especially since most government programs are also subsidized.

“If one day tourism fails, then Bali cannot move forward, and it will be even worse if the people are over spoilt,” he declared.