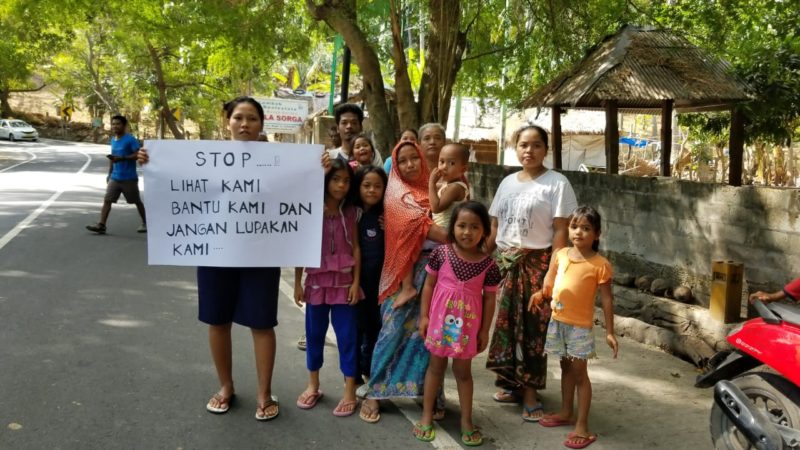 Sign. Stop, look at us, help us and don’t forget us.

Yes, there is no doubt we have been standing on shaky ground lately, but hopefully that is over for the time being.

Right in the middle of the Ku De Ta Day Party last Sunday at around 7.45pm I had just sat down to talk to some friends. Next, it felt like my chair was beginning to move sideways, backwards and up, all at the same time. People began to scurry towards the beach side as the tremor mounted. The quake was over in seconds but it definitely left a lasting mark.

After last Sunday’s earthquake it took a while to realise what had happened over in Lombok at that very same time. Considering that only a week before they had just had a similar sized quake, it must have been terrifying, let alone the gravity of the damage. It didn’t take long to realise they needed some concerted help from everyone that could offer assistance and from the images coming from North Lombok and the Gili Islands it was obviously more serious than anybody imagined.


There are many people helping in Lombok already right now; government agencies, international relief organisations and concerned people with connections in the area. After a conversation with Trevor Chee we jumped on board to help our old friends, the Slamjam brothers, who had joined forces with a local Bali charity organization, Agung Saga Yayasan, originally set up to help people involved in the Mount Agung eruption, but now focusing on Lombok aid and relief. The Chee brothers have had experience with such things before, previously helping people caught in the Napal earthquake of a few years back. They suddenly found themselves with over a thousand homeless people in a field at the back of their property in Mentigi, Lombok. They are on the ground now and are doing all they can to help those people and other affected people in that area. And there are so many more people that need help too.

They need funds to buy food, water & medicine, build temporary shelter structures, toilets and showers. We will be receiving reports from them daily on their progress.

From what we have seen and been told by people in the field, the whole of North Lombok appears to be a mess, with demolished homes everywhere, roads and electricity cut, water and food scarce. As Arief from Artha Graha Peduli, who is over there now, told us, 50% of buildings have been destroyed and 80% of people in the north have lost their homes.

The people of North Lombok need our help right now. Please support their ongoing work by donating to the cause. 10 bucks would go a long way, anything will help.

MORE IMAGES OF WHATS GOING ON OVER THERE ON THIS STORY