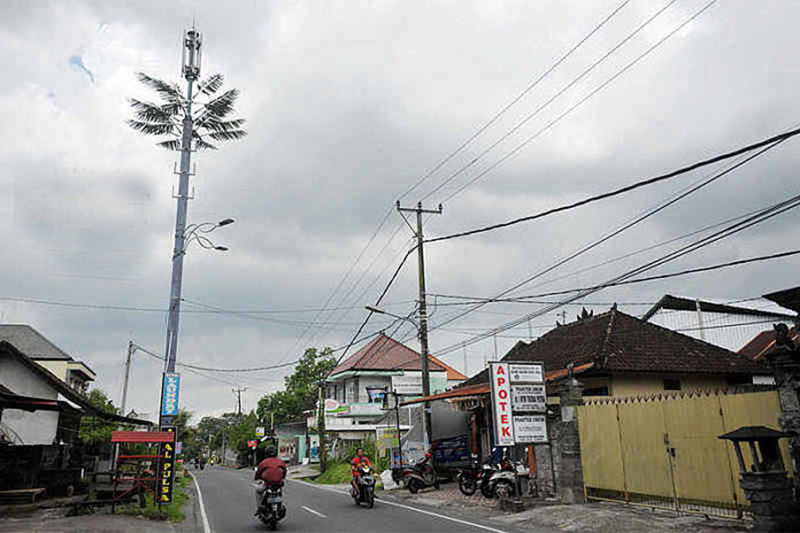 Image: The camouflage tower popping up all over town. Credit. Bali Post

The Badung Regency Government has begun implementing free public WiFi throughout the regency. To begin the first phase, the government, with the regional Communications and Information Department (Diskominfo) has started building dozens of camouflaged towers, which are hoped to resemble coconut trees.

The Head of Badung Diskominfo, Wayan Weda Dharmaja, said that the camouflaged towers were owned by third parties. “These towers are the infrastructure that will support free WiFi right to the village level,” he said on Thursday.

He said that the smart city towers have been built in six districts, Mengwi, Petang, Abiansemal, Kuta, South and North Kuta. At least 40 towers have been prepared. “We could not build them ourselves with the limited budget we have, so we were cooperating with Mitra Tell, TBG, and the others and other third party groups,” he said to balipost.com.

The program is set to be completed this year. “We are arranging a master plan to build infrastructure of anything that is related to internet access. At the moment we are just building the strategic towers to cover all areas and the number will be adjusted to suit,” he said.

The budget for the free internet program in Badung is at Rp 26.8 billion for the whole project and 5-10 Mbps of internet speed will be provided.

“Free internet will be installed in public places, such as at bale banjar, community health centers, village offices, camat offices and schools in the entire Badung regency. We will install 986 WiFi networks,” he said. He also said that with the speed of 5-10 Mbps, the free internet can be accessed by 10-15 people at each point.

We will just have to wait and see as to how this all pans out in the near future. Ed.