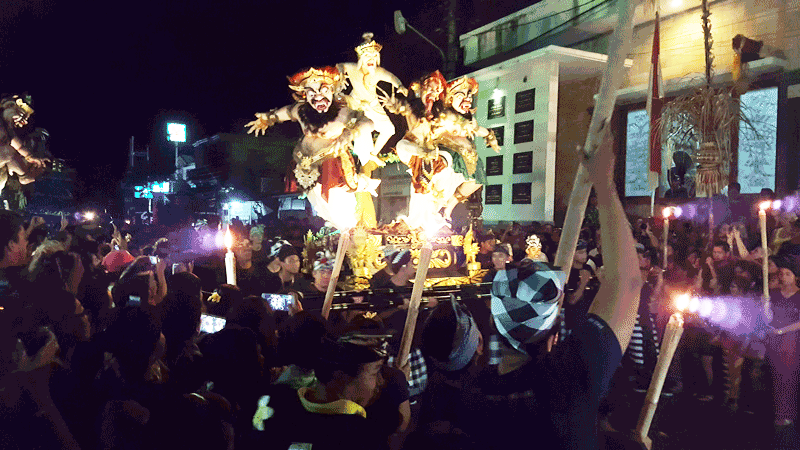 The Ogoh Ogoh parade on the night before Nyepi, or Pengerupukan, in and around Denpasar may be quieter this year after the Denpasar Cultural Board prohibited the use any kind of sound system on the night.

They announced the new Nyepi policy after discussions with several parties in Sekaa Teruna Teruni (STT), the organization that is assigned to organize the ogoh-ogoh parade. The socialization was implemented at Graha Sewaka Dharma Lumintang on Saturday.

The announcement was in conjunction with a discussion about the celebration of the Nyepi Holiday. Denpasar Mayor, Rai Mantra, hoped that the celebration would be safe, comfortable and could be accepted by the community within religious and cultural ethics. He also said that the most important thing was that the government and the stakeholders, especially the STT, have the same perspective about the implementation.


He explained that they have agreed in not allowing any sound systems during the parade and they will only be allowed to use traditional Balinese music instruments because the creativity of the parade should show the cultural identity.

“So we can grow together in order to preserve the Balinese culture,” said Mantra.

Meanwhile, the Head of Denpasar Sabha Upadesa, I Wayan Meganada, said, accompanied by the Head of Denpasar Pakraman Village Middle Council, A.A Ketut Sudiana, that the policy to maintain safety and order was agreed by all of the team members. He also hoped that all of the ogoh ogoh don’t have any political, pornographic and discriminatory elements.

He also prohibited any ogoh-ogoh made from styrofoam and demanded the use of gamelan or other traditional Balinese instruments.

Nyepi will be held from 6am, Thursday, 7 March to 6am, 8 March. Pengerupukan begins after sunset on a main street intersection near you on March 6.