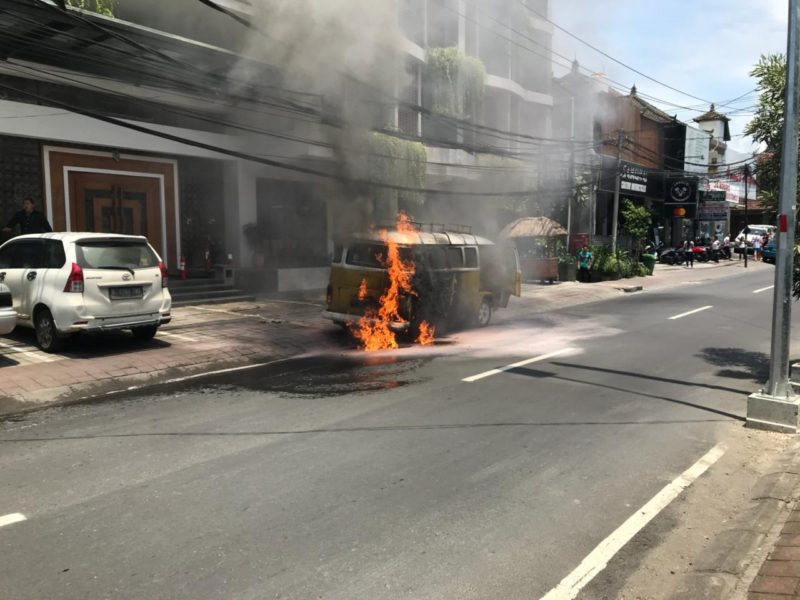 A Volkwagen Combi van caught fire on Jalan Petitenget, near Banjar Umasari, on Monday around 12 noon. Luckily the driver, a central Java college student, escaped uninjured, but the vehicle was not so lucky.

Based on reports, the fire was caused by a battery short circuit which moved quickly into the fuel tank. The rear of the car burst into flames and burnt out most of the rear section of the vehicle.

According to eye witness Rusty Shackleford, “It exploded like three or four times. There were small explosions caused by pressure in the gas tank. The security guys tried to put it out with a dry chemical extinguisher. When that failed, they brought out the hoses. It was quite a show. The dry powder put the fire out on the road, but the fire was coming out the fuel cap and probably other parts of the engine.”

The Chief of Badung District Fire Department, I Wayan Wirya, confirmed the fire was initially known about through Social Media and was followed up by the Main Office Commander who coordinated with Kunti Fire Station. “But before they could arrive, the fire was put out by nearby security officers and passersby,” he said to nusabali.com.

“Fortunately there were no injuries but the vehicle was burnt out. The total loss was about Rp 80 million,” the fire chief said.