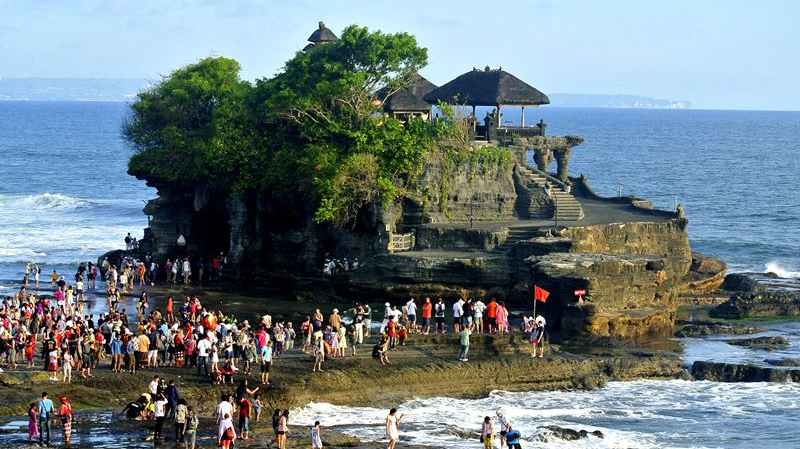 Chinese tourists are back in droves lately, which can especially be seen in tourist sites like Tanah Lot and Bedugul’s Ulun Danu Beratan Temple.  Although tourism officials hoped European and American visitors would increase with the weakening Rupiah, the dominance of Chinese tourists has still been strong during the first quarter of 2018.

Tanah Lot manager, I Ketut Toya Adnyana said on Wednesday that while tourist arrivals to the site dropped significantly during the eruption of Mount Agung they had now begun to normalise. The average Tanah Lot visitor per day is currently 9,000 to 10,000 visitors.

Based on their data, the total visits during April or until Tuesday (10/4) reached 97,774 people. Where foreign visits numbered 50,085 or 51 percent and domestic visits were 47,689 people or 49 percent. The foreign tourist visits were dominated by Chinese, said Toya Adnyana.

“The assumption is that the weaker Rupiah will bring more tourists from Europe or America but the reality in the field is that the Chinese still dominate the visits to Tanah Lot compared to other countries,” said Toya Adnyana.

The dominance of Chinese tourists can also be witnessed in Ulun Danu Beratan Temple. According to the manager there, Wayan Mustika the number of tourist visits currently averages 220 people per day, which is a marked increase compared to the Mount Agung eruption period. “There are also visitors from other countries, but the majority from China,” he told BaliPost.

Many other tourist spots are also being inundated by Chinese tourists including Nusa Penida where this video below was taken recently. @putu_casplabali

There was no mention of Australian tourists in the article, who were back to the number one position in the latest foreign arrival stats. Ed.