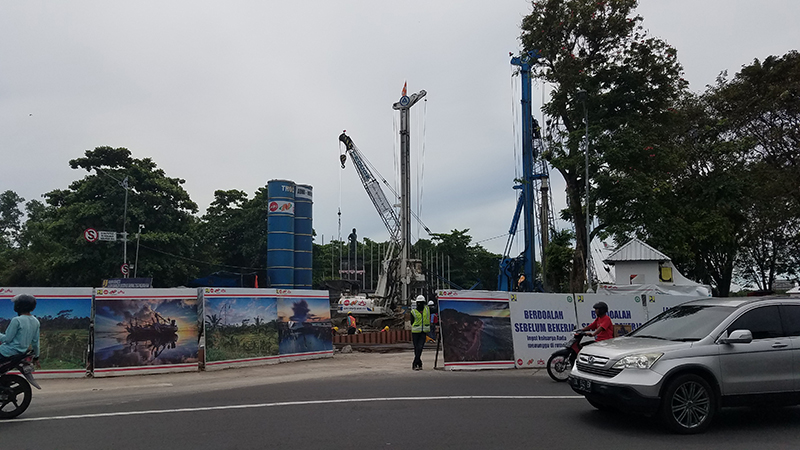 Traffic jams around the Ngurah Rai Monument underpass project in Tuban, are getting worse every day. It was so bad on Monday that 32 French tourists could not get to airport on time and missed their plane.

The incident was posted on a Facebook account on Tuesday which went viral with dozens of comments from netizens.

According to The Head of Badung Tourism Department, I Made Badra, the fault lies squarely with the travel agent because the tourists’ exit was not planned carefully even though they knew about the traffic situation at the underpass project. He suggested that travel agents should say to their clients that they need to be at the airport two hours before the boarding time. “The agents have to calculate the trip to the airport carefully because of the underpass construction project,” he said.


He also apologized for the incident. “We, the Badung District Government apologize and we will try to do everything possible to improve our service,” he said to tribunnews.com. He explained that the Ngurah Rai Monument underpass project will raise the tourist satisfaction levels in the future. After the project is completed, the traffic in the area will be a lot smoother.

Meanwhile, the Chief of Bali ASITA (Association of The Indonesian Tours and Travel Agencies), Ketut Ardana, has warned all travel agents to arrange to get their clients earlier to the airport. “The underpass project often causes traffic jams, especially from Jimbaran and Nusa Dua. This cannot be avoided right now as there is no other alternative route,” he said yesterday.

“We already suggested that ASITA members should write an official letter to the government asking to hasten the project,” he added.

Yasmara advised all vehicles from Nusa Dua to use the Bali Mandara Toll. Previously, Denpasar Traffic Police had advised all cars from Denpasar to use the Ngurah Rai Monument exit from the toll, while cars from North Kuta going to Nusa Dua can go left at the Dewa Ruci underpass and enter the toll road through Benoa.