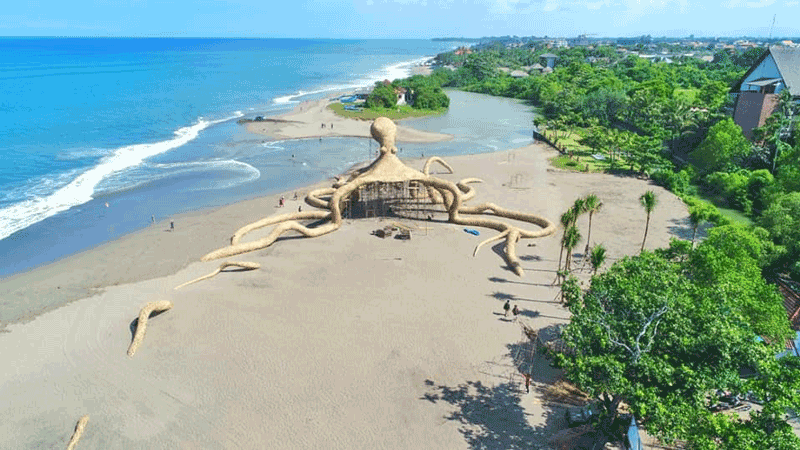 The second edition of the Berawa Beach Arts Festival will be held on Berawa Beach, Tibuneneng Village, Canggu on May 23-26. The local committee hopes that the festival can increase the tourist visits to Berawa Beach and with a gigantic octopus installation they hoped they could break the MURI record on the biggest installation category.

These aspirations were voiced by Tibuneneng Head, I Made Kamajaya, at a press conference on Berawa Beach on Tuesday afternoon. “Usually, events like this are held in Kuta, Legian, or Nusa Dua. Tibuneneng Village has a potential, too, with its 1.4 kilometers of beach. We are holding this festival to promote Tibuneneng Village, because the tourism potential is great here,” he said to nusabali.com.

“We also thank the Badung Tourism Board, which supported us in holding the festival,” he said.

Meanwhile, the head of the committee, I Made Dwijantara, explained the difference between the first and the second editions of BBAF. During the first edition, they broke the MURI record for the Cak Konser Kolosal (Kecak dance), which had 5,555 Badung high school students taking part. This edition, they wanted to break MURI record with the gigantic octopus. It is supposed to represent the deep blue spirit and increase the community awareness to preserve the ocean. “We want to remind the community to preserve the ocean,” he said.

Badung Tourism Board Secretary, AA Putu Yuyun Hanura Eny, hoped that the festival could liven up Berawa Beach and told the gathering “The budget of this BBAF, which Badung has helped sponsor, had reached Rp 1.290 billion,” she concluded.