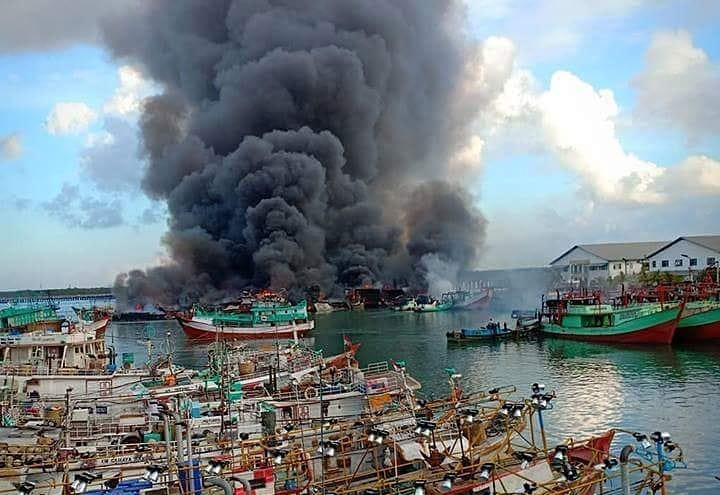 It was already reported that the fire started as a result of short circuit on the first boat, KM Cilacap Jaya Karya and it grew fast because of it igniting the boat fuel on board.

“The initial cause was a short circuit. Then it spread and destroyed another 36 fishing vessels,” Susi said. Another five speed boats were also burned during the incident.

She also said that all the boats at the port were not small fishing boats, as they were supposed to be. For example, the larger Bandar Nelayan boats are used for industrial fishing.

“They were not small fishing boats, but large fishing vessels,” she said. Susi also said that her team found many violations after collecting data on the incident. “According to the law, small fishing boats should have a capacity of 5 GT, but there were many 100 GT boats tired up there. They were industrial sized fishing boats,” she added.


According to Susi, Benoa Port is not a fishery port and the management is under the Sea Transportation Directorate General of the Ministry of Transportation. KKP has several fishery ports, such as Jembrana and other locations.

In an attempt to do something about the lawlessness at the fishing port, the government will re-list the boats that tie up at Benoa Port in future. Many of the boats are violating their proposed function and some of the owners don’t even have them registered.

“It’s too crowded at the port. The boats should be re-listed or destroyed if the owners didn’t admit to owning them. They did that because they were afraid of having to pay tax, etc,” she said.

The KKP Minister also said that based on their investigation, there were more than 700 boats that docked at the port and carried out many activities. There were 173 foreigner boats and many of their owners didn’t admit to owning them. She said that her ministry only received 112 foreigner boat registrations.