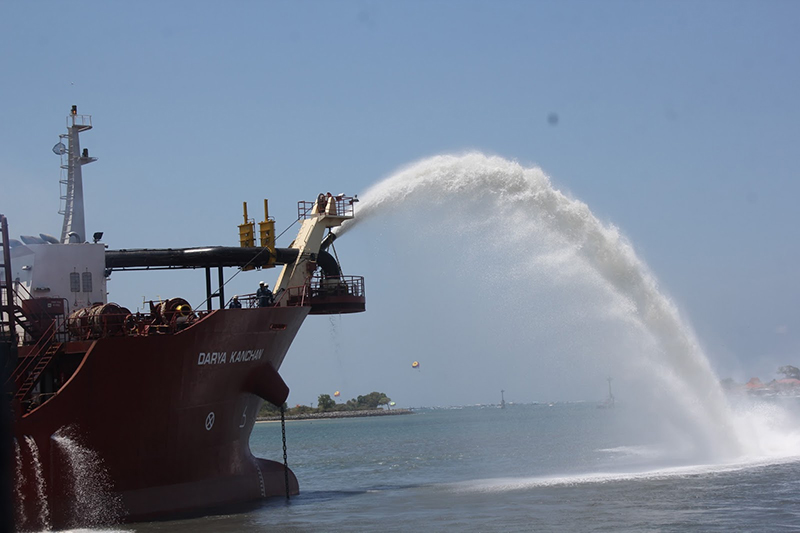 Many people travelling along the toll road recently have noticed, and are talking about, the sand being piled up on a stretch of water near Benoa Port, which is very visible from the toll road. There have been complaints by local residents in the last week to Pelindo lll, the government agency in charge of the port, but the pile of sand continues to grow and has now been flattened to form a new piece of reclamed land.

There are many rumours saying that this is part of the now supposedly defunct Benoa Bay reclamation project or that Pelindo lll will build tourism facilities on the new space, such as accommodation and recreation areas.

Bali Regional Parliament Representative I Nyoman Adnyana, said earlier this week that if they build more buildings outside of the port expansion project it would violate the spatial usage plan.

“They should not put the dredged sand there. It should be put it in another place. But they say they will put it there temporarily and after we don’t take any action, they flatten the sand and I have even heard they even plan to build tourism facilities there. If so, that’s a violation of the spatial plan,” he said to balipost.com on Tuesday.

After a meeting with Pelindo III on Tuesday (21/8), the Tanjung Benoa community still has not received a copy of the Environment Impact Analysis report about the Benoa Port and trench dredging till today.


In response to this, local community leaders are contacting the DPRD Bali asking them to help check the permits and documents that Pelindo should have prepared before dredging the port. “Until now, we have not been given an environmental impact analysis report and the permits have not been explained to us,” said Chairman of the Tanjung Benoa village, I Kadek Duarsa, stated Balipost today, Friday.

Besides the dubious nature of the pile of sand growing by the day, the community is also concerned about the environmental damage that could be caused by the development.

Pelindo III have said in response that in the near future there are no plans to build on the land as they are currently still focused on several main work areas. This was revealed by the Benoa Branch Deputy General Affair Pelindo III, Kariana whom reporters met at his office on Wednesday (29/8).

Kariana said the work carried out at this time was part of the implementation of the Benoa Port Master Plan (RIP). This will take a long time. “This project is part of a long process, which is ongoing until 2030,” he said.

Asked about the community suspecting there would be construction of a hotel on the new land, Kariana claimed he understood why there were some concerns. “Bearing in mind, the public does not know what Pelindo III is doing there, as we continue to socialize what will be done in Benoa Port,” Kariana said.

So what is going on?

Currently they are dredging the harbour trench to accommodate larger ships with a length of 250 meters. This will allow these ships to dock at the port. In addition, there are also terminal improvements being carried out. The existing terminal can accommodate 1,500 passengers and once finished the new terminal will be able to fit up to 5,000 people. Another part of the project is the appearance of the entrance. “The entrance of Benoa Harbour is also receiving a workover. We are working to make it look better,” he said. The future Benoa Harbor is also designed to be able to accommodate large yachts, cruise ships and other commercial vessels.

Regarding the legality of the port improvements, Kariana stated that the papers were all complete being approved by the Ministry of Transportation. “All licenses related to this RIP already exist, including the environmental study. If we didn’t have one, how would we dare to work?” he said.

Asked about recommendations from local governments, such as the Denpasar City Government, it was said that there was no need because it is controlled by the central government. “We waited too long and there was no clarity at all. Finally the ministry issued their permit,” he said.

Confirmed separately, the Head of Denpasar One-Stop Integrated Investment and Licensing Service (PM and PTSP) I Made Kusuma Diputra confirmed the Denpasar government had not issued any permits related to the Benoa RIP.