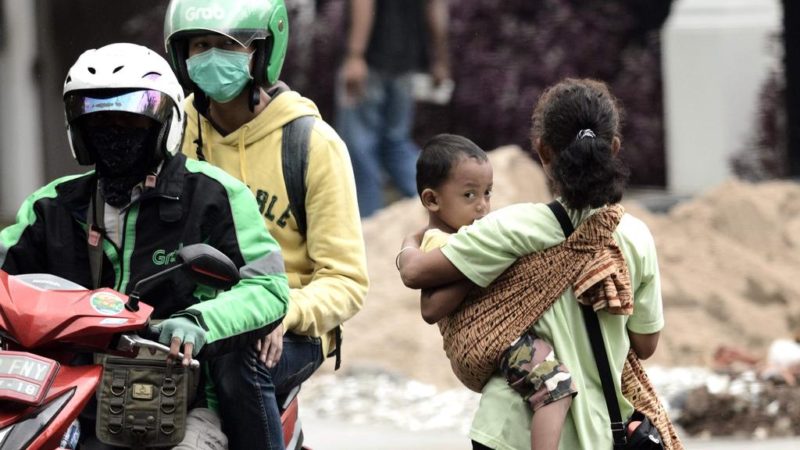 Begging appears to have become a regular job nowadays, and according to a report in the Tribun Bali, it is not only because of a poor economic condition. According to a story today in the local newspaper, beggars can get up to Rp 300,000 daily or up to Rp 9,000,000 per month, which is more than a manager’s salary in a local company.

“Yes, at least I can get Rp 250,000 a day,” said Nyoman Sari, a beggar who spoke with Tribun Bali at the end of January on the main road in Ubud. Sari begged with her kids, one is still under five years old and the other is nine. “My oldest child is in third grade. He hasn’t been going to school for several days because I asked him to come with me,” she said while pointing to her nine year old. Nyoman Sari is from Banjar Munti Gunung, Tianyar Tengah Village, Kubu District, Karangasem.

On the Jalan Imam Bonjol – Sunset Road – Raya Kuta intersection, a female beggar admitted that she can get Rp 150,000 when staying in one place. If she could stay in two places, she can get Rp 300,000 in a day. Tribun Bali had a conversation with her when she held a baby and begged to the passing street walkers. “I used to make incense at home, but the income was not good. That’s why I beg right now,” she said. She is also from Munti Gunung.

The other beggar that was met by Tribun Bali said that minimum she can get Rp 50,000 in a day. “At least I can get Rp 50,000,” she said when she was resting on the south side of Bintang supermarket, Ubud. Then another beggar holding a baby came and had a conversation with her. They were begging outside of the stores around Ubud. But they live on Padang Sari, Tianyar Tengah Village, Kubu District, Karangasem. One of the beggars avoided Tribun Bali when she was approached.


The Chief of Karangasem Social Service Department, Ni Ketut Puspakumari, confirmed that beggars can get up to Rp 9 million per month. According to her, most of them were operating in Ubud, Denpasar, and Kuta – Denpasar border areas. “Right now, the amount of the beggars that are operating in Kuta is fewer, most of them are operating in Ubud, because they target foreign tourists. We have recorded that the income beggars receive was around Rp 6 to 9 million per month. That’s why it’s difficult for them to stop begging, because the income is quite good,” she said to tribunnews.com.

Denpasar Social Service Dept once found a beggar with Rp 4,744,000 in his bag when he was caught by Pamong Praja Police and he was brought to the Social Service department. He said that he could get that much with begging for a week.

Moreover, several Ubud bank employees said that the homeless and the beggars that are operating in Ubud can save between Rp 2 million – Rp 6 million per month. “It’s difficult to discipline them. After we catch and then release them, they beg again, because they can have a good life just from begging. They can buy mobile phones and save millions of rupiah every month,” said the Chief of Gianyar Pamong Praja Police, Cokorda Agusnawa, on Monday.

According to Denpasar Pamong Praja police officer, I Gede Anom Sayoga, there are many beggars that come from outside of Bali too. “Sometimes there were beggars on Denpasar. It’s seasonal. If we find them, we will arrest or move them on,” said Anom Sayoga last week. Denpasar beggars have a unique characteristic, some of them are pretending to be a disabled, some are pretending to be a crazy men. They will do anything possible to get the passerby’s attention.

“Some of them are pretending to be stressed. Most of the pretending beggars are from outside of Bali. We already observed them on CCTV footage. We check them after we make a raid to see if they really are invalided,” said Anom Sayoga. Denpasar beggars targeted crowded areas, like traffic lights, in front of malls and markets.

It was 1am on January 29 when a small bemo van parked near the seven beggars on Jalan Imam Bonjol – Sunset Road intersection. They all jumped in the vehicle and went up Jalan Imam Bonjol and got out in front of Gang VII. The beggars were staying down narrow gangs on Jalan Pulau Biyak, Banjar Tegal Gede, Pemecutan Kelod Village, West Denpasar. “The Munti beggars live here. They slept in their rooms every day,” said one of the landlord. “Almost all of them are from Karangasem. “There are fruit traders and other traders, too,” he added.

The rent of one simple room is Rp 350 thousand per month.

In Ubud, according to a security worker in one of the restaurants next to Puri Ubud, the beggars who roam there seem to never be deterred even when picked up Satpol PP officers.

After being repatriated to their area of ​​origin, usually the beggars will come back by renting an angkot/van from Karangasem to Ubud within the next week.