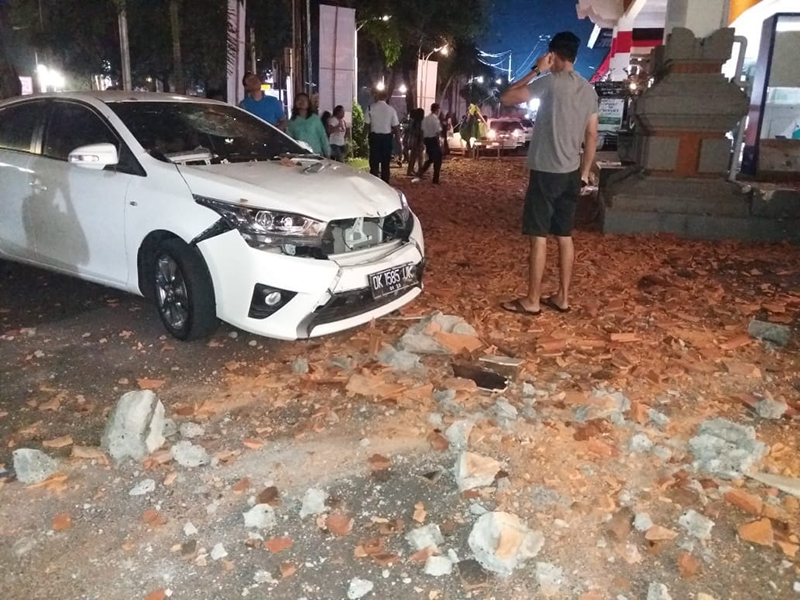 Last night’s earthquake measuring 7.0 on the Richter scale, with an epicenter in North Lombok, about 150 kms from Denpasar, caused two deaths in Bali. Nusabali reported that the earthquake also caused dozens of people to be injured, and a number of buildings to collapse or to be badly damaged.

Ni Ni Kadek Yuliani, 21, from Kubu, Karangasem was killed by a collapsing wall as she tried to escape from her boarding house in Jalan Juwet Sari, Denpasar, while Witjaksono, 64, on holiday from Bandung, died from a heart attack at the Golden Place restaurant, Kuta.

There were also dozens of people injured from Karangasem to Badung districts, mainly due to falling debris and collapsing walls. Makeshift tents are being erected at Sanglah Hospital as parts of the buildings there were damaged and 300 patients were put in a neighbouring hall after the earthquake.

In Denpasar, there were injuries at the Matahari Mall when four employees, who were already outside the building, were hit by falling tiles from the roof.  Kuta’s Bali Mall Galeria was also damaged and parts of the ceiling at Ngurah Rai International Airport also fell down, but the airport stayed open with no flight disruptions.

Meanwhile, in a statement released by the BNPB earlier today, it was stated that the impact of the 7 SR earthquake that occurred at a depth of 15kms at 18.46 local time had a broad impact around the West Nusa Tenggara region.


There have been 82 people reported dead in Lombok, a figure which authorities expect to increase, with hundreds of people injured and thousands of homes damaged. Thousands of residents fled to safe places and the combined Indonesian rescue apparatus continues to evacuate and handle emergencies. The worst hit areas were North Lombok, East Lombok and Mataram City.

According to Head of Public relations at BNPB, Sutopo Purwo Nugroho, people panicked and scattered onto the streets and many buildings and houses that had been damaged by the previous earthquake suffered more damaged and began collapsing. Also, there was a tsunami warning that made people panic more as they tried to find higher ground.

BKMG reported that a small tidal wave or surge was recorded around Lombok, North Sumba and even as far as Benoa, Bali where it reached at around 8pm. There were no reports of damage.

Gili Trawangan was also hit hard by the earthquake with buildings collapsing around the island, with many injuries reported. Most tourists and locals headed to the top of the hill trying to evade the potential tsunami. Small boats are now ferrying tourists from the island to bigger ships offshore to be taken back to Lombok. There was reported to be over 1000 tourists on the island last night.

There have been over 100 aftershocks since the major earthquake last night, including another 5.4 RS this morning at approx. 8.30am. 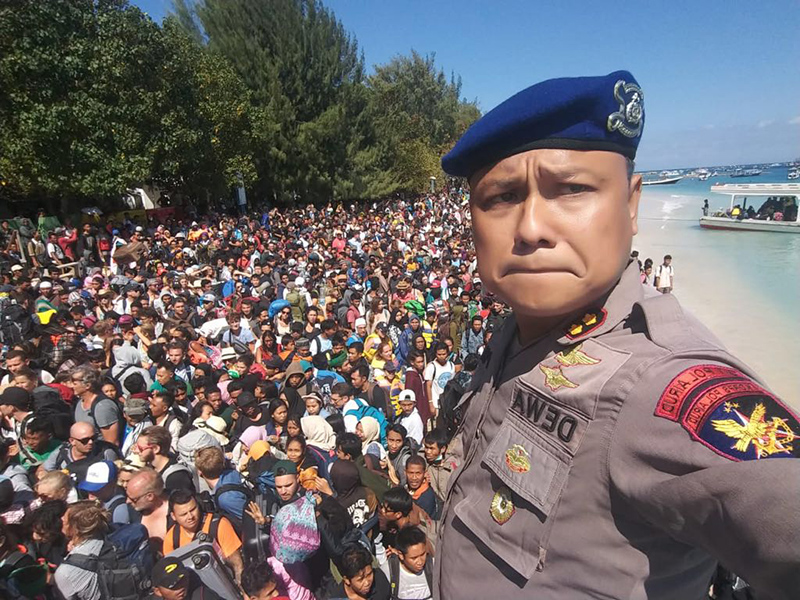