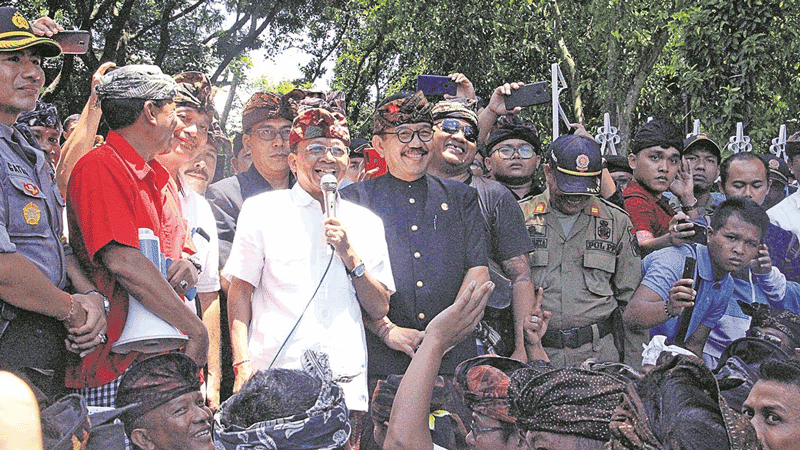 Dozens of driver from the local taxi organization, United Bali Transportation (BTB) visited the Bali governor’s office on Monday. They wanted Governor Wayan Koster to fulfill his promise related to the ongoing online and conventional taxi dispute where Koster has said previously that he is committed to support the conventional taxis, as he feels those taxis have supported the tourism development and image of Bali for a very long time.

“We should not forget their contribution even though we could enjoy a more modern taxi service now. They have been here for a long time and they were recruited based on several qualifications,” said the Governor at the press conference after he had met with the BTB members.

Koster added that tourism is the main income for the Bali economy and the conventional drivers have contributed in building it, because they could explain Bali and its tourism to their guests. That’s why they should be supported and their abilities should be increased. “Please don’t doubt my commitment, I will keep supporting conventional taxis,” he added.


Moreover, Koster also promised that he will help the drivers with low interest loans to buy new cars. “The Governor Regulation will prohibit online taxis to enter conventional taxi areas. If they want to serve the customers there, they should be registered as the member of driver community in that area. We will also facilitate the conventional taxi drivers with low interest loans from BPD to buy a new car,” he said.

Meanwhile, BTB spokesperson, Ketut Suriadi, hoped that the government could mediate between conventional and online taxi drivers to solve the issues between them. He explained that conventional taxi drivers only get customers from their community areas. “We could not get customers outside our community areas, because we respect the driver community there. If a driver wants to be a part of our community, he should be tested and he would have to pay to get a contract. So, we should respect each other,” he said.

BTB coordinator, Nyoman Suwendra, said that he appreciated Koster’s commitment and his side will monitor the content of the Governor Regulation. “We are satisfied with the commitment, but we are sad too because we could not close online taxi business. We will wait for the regulation,” he concluded.