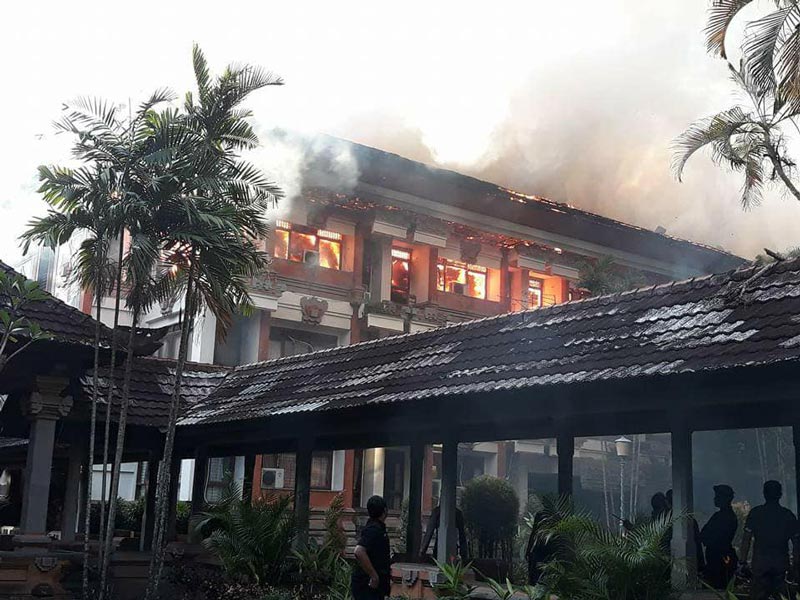 The Bali Governor’s offices, in Renon, Denpasar, caught on fire at about 4.30pm yesterday.

“The fire started in the Law and Government Systems Bureau, Unit V Building,” said one of Bali Provincial Government officers, Made Dwi, on Tuesday night.

The fire began on the third floor of the building and then spread down to the second floor. Fire fighters arrived 15 minutes after the first sign of smoke, but struggled to contain the fire. The strong winds at the time caused the fire to grow and spread to other rooms. The cause of the fire is still unknown, but it is suspected to have come from an electrical short circuit.

Many fire trucks came from all over the district to fight the fire, including one from as far as Klungkung. Bali Polda even brought trucks with water cannons (used normally for riots) to help according to liputan6.com.

After three hours, they managed to extinguish the fire.


Bali Governor Made Mangku Pastika briefly reviewed the scene as officers tried to extinguish the fire.

Pastika said there were only a handful of archives in Unit V. Important archives are said to be in a safe place at the Archives and Library Building. “The archives are safe. Now, there is no longer a lot of paper,” he said.

Pastika also said that the fire was slow to be discovered because most of the employees had already gone home. “Unit V was also an old building, built around 1978 in the era of Governor Prof. Ida Bagus Mantra,” he said.

While the fire is suspected to have started because of an electrical short circuit, others have wondered if there was a connection with the gubernatorial elections draw held in a nearby building yesterday afternoon.

“Do not go too far about where a fire can occur. Fires also happen at home. Maybe it’s time to build a new building,” he told Bali Post.