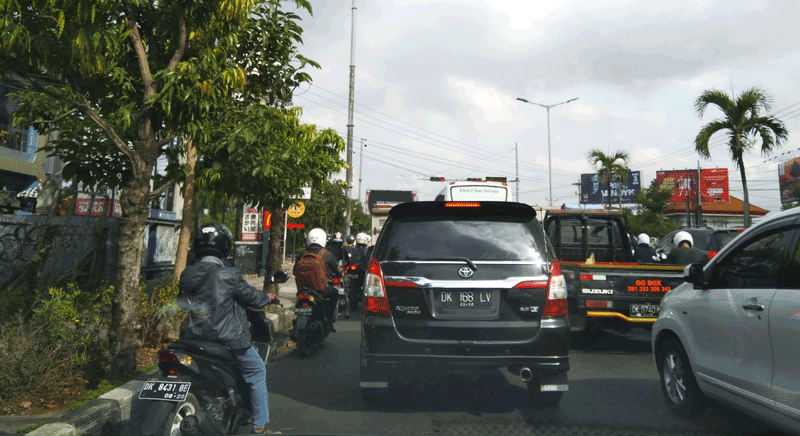 Image: Jalan Nakula is getting some changes. Credit: twitter.com

Badung Transportation Board (Dishub) will change the traffic direction on Jalan Nakula on the Kuta/Seminyak border in an attempt of solving on-going traffic issues in the area, especially during working hours and weekends.

“We held a Badung District Traffic and Transportation Forum meeting with all stakeholders and we decided to change the traffic flow on Jalan Nakula and Gang Baik-Baik on Legian and Seminyak area. We will try out the changes on February 14, 2019. We hope that all of the related institutions can socialize these changes to all the community and street users,” he said to nusabali.com.

Meanwhile, the Head of Badung Traffic, Tofan Priyanto, said that his team has prepared the following road changes.


The first is changing the two way flow on Jalan Nakula to one way, West to East, from the Jalan Arjuna (Raya Seminyak) intersection to Jalan Eka Laweya (the intersection East of the bridge) and sending traffic south. The second change is to prohibit vehicles, except motorbikes, going from East to West along Nakula from passing through the Jalan Nakula /Eka Laweya intersection. The third change is the two way traffic of Gang Baik-Baik (The Orchard) changing to a one way flow from North to South.

Jalan Sri Rama and Padma East will also be changing to one way to accommodate traffic flow from what appears to become a hotspot around the Nakula bridge – but we could be wrong. Ed.

However Tofan says comfortingly, “We have carried out a technical study with related stakeholders and the residents around the Kuta/Legian area before we implemented this layout.”

When he was asked about the duration of the trial, he said that it would be situational. “We will carry out the trial for a week or for a month. It depends on the situation. If there aren’t any complaints, we will evaluate it and we will permanently implement it,” he concluded.