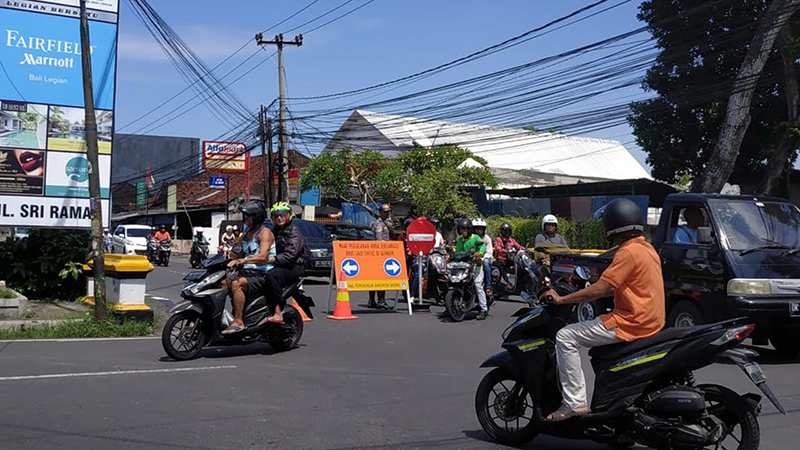 Badung Transportation Board (Dishub) conducted the traffic flow change trial as planned on Jalan Nakula, Legian, on Thursday.  The Head of Badung Dishub, A.A. Ngurah Rai Yuda Darma, who led the trial, said that there were 35 officers assigned from Badung Dishub Main and Traffic Technical Implementation Units to monitor the changes and effects.

After evaluating the implementation yesterday, he said that his side will assign several officers on every intersection involved and they will coordinate with the related authorities. He also said that they will evaluate the trial every day and record the impact it has on the traffic flow.

“We will install several traffic signs on the impacted roads,” he said to balipost.com.


Meanwhile, the Head of Badung Dishub Traffic Unit, Tofian Priyanto, said that the trial caused traffic jams on the East Padma-Sri Rama intersection, but it didn’t last long. He also said that the traffic flow changes had some positive results, as the crossing of the vehicles became less, from 16 crossings to three crossings. Furthermore, they only need to have two phases on the traffic lights on Arjuna-Nakula intersection – from the south and north sides.

He explained that the trial will only last one or two weeks before they permanently implement it.

I think all interested readers will have to go for a drive and find out for themselves what the changes really are. Ed.