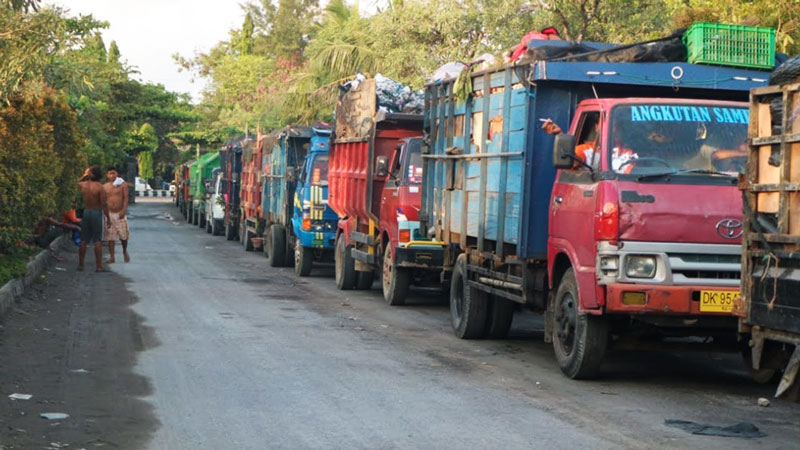 Image: Garbage trucks line up at the dump. Credit: Youtube

Badung District Environmental and Sanitary (LHK) Board assigned 75 officers to collect the trash that piled up on the road sides in the Kuta area recently. They were working non-stop Sunday and managed to collect 80 trucks of rubbish in 18 hours.

The Head of Badung District Environmental and Sanitary Board, I Putu Eka Merthawan, said that the collecting process was started on Sunday at around 8am. They managed to collect 35 trucks of trash until that afternoon. But, even with that there was still so much rubbish piled up on the road sides so decided to work overtime until 1am.

“It could be said that we were working for two days to collect the trash. The officers decided to work overtime and collected more trash to be delivered to Kuta and Seminyak depots. They did that to eliminate the uncomfortable view that was caused by the piled up trash that was already stinking,” said Eka Merthawan to nusabali.com on Monday afternoon.

Eka explained that since the trash delivery to Suwung and Sarbagita dumps in South Denpasar was now limited they have informed the head of sub-districts and villages to maintain order in their respective areas.


“When the limit was applied, we informed the head of sub-districts and villages to tell their residents to keep their trash for two days in their houses. They can put the rubbish on the road sides on the third day and the officers will collect it on that day because we have stated that we will collect the trash every three days. But they ignored that and put the trash directly on the road sides,” he stated.

To anticipate the piled up garbage in Kuta, Legian, Seminyak, Tuban and Kedonganan road sides, Eka suggested that residents follow their instructions and do not put the trashes on the road sides before the third day. “We are still looking for a solution, that’s why we hope the residents participate and pay attention to this piled up trash issue,” he concluded.

Meanwhile, yesterday morning (11/3) officials from the LHK together with Kuta residents cleaned up the piles of rubbish along Kuta Beach.

Six garbage truck loads were taken to a new piece of land that will be used as a temporary dump owned by Kuta Adat Village on Jalan Kubu Anyar, Kuta.

Eka Merthawan explained that the rubbish in the Kuta Beach area hadn’t been collected for a week and the evacuation will continue today, Thursday.

After being transported to the land belonging to the Kuta Adat Village, the garbage is planned to be landfilled to reduce unpleasant odors.

Early this week, Kuta Village Head, I Wayan Wasista stated that to address the rubbish problem on Kuta Beach, Kuta Village would provide land for a temporary rubbish dump located on Jalan Kubu Anyar, Tuban. Even though the land area is 40 are, only a portion of the land is used to store garbage. “The land is specifically for collecting garbage from Kuta Beach alone. This is one of the solutions from the Kuta Traditional Village to overcome the garbage that is accumulating along Kuta Beach,” he said.